Joe Judge Went On A Wild, Angry 11-Minute Rant About The Giants And It Just Gets Crazier As It Goes On 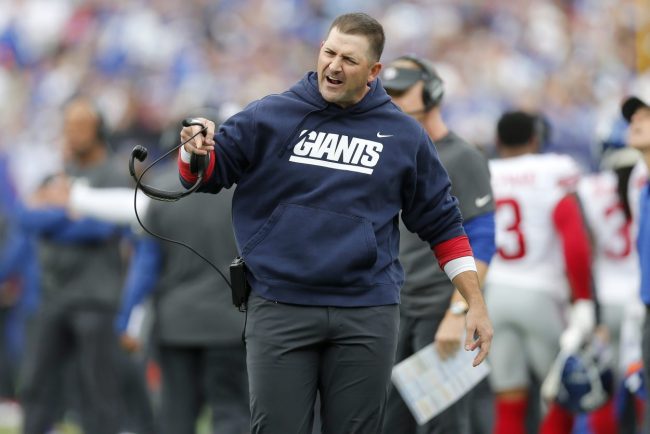 When the Giants hired Patriots special teams coordinator Joe Judge as its new head coach in 2020, there was a slim chance that it was going to work out. The verdict is still out and there is still time for the 40-year-old to figure it out, but his tenure is not going well so far.

Through his first two seasons thus far, New York has won 10 games and lost 22. 12 of those losses came this season with one game left to play and what was perhaps the worst came on Sunday.

During the Giants’ 26-point loss to the Bears, the team gained 151 total yards and scored only a field goal. They converted only one of 11 third down attempts and failed on their single fourth down try.

With (hopeful) franchise quarterback Daniel Jones out for the season, Mike Glennon got the start at quarterback. He completed four passes for 24 yards with two touchdowns and finished with -10 yards passing. Receiver David Sills caught one pass for 12 yards and as did tight end Evan Engram, while running back Devin Booker caught two balls for 0 yards.

It was ugly. Very, very ugly.

After the game, Judge spoke with the media and went on a wild, angry rant about why the Giants aren’t actually a dumpster fire. He even went so far as to say players who were on the team last year call him twice a week to tell him how badly they wish they were still playing under him.

The entire rant gets crazier as it continues.

Give it a listen, it’s quite the journey:

Joe Judge gave an impassioned, 11-minute answer on why the Giants can get things turned around.

"When we look overall at what we’re doing, there’s a number of things going in the right direction that we know are foundational things."

“There’s a lot of teams right now that are out of playoff contention. Whether it’s golf clubs in the locker room or people planning vacations outside of it, where there’s a lot of finger pointing and blaming and shouting, all that stuff…. we don’t have any of that.”

Joe Judge praises the way the Giants defense has played in spite of the offense struggling:

“This ain’t a team that’s having fistfights on the sidelines. This ain’t some clown show organization or something else, okay?”

Joe Judge says that players who were on the team last year still call him twice a week to say how much they wish they were still with the Giants, even though they’re getting paid more elsewhere:

The entire thing sounds like a last-ditch effort to save his job. He is trying to convince everybody that his team is not a complete clown show, but it only makes him sound even more desperate.

Although the part about former players calling him twice a week is funny, the funniest part might be the fact that he is bragging about his team not getting in fistfights on the sidelines.

That team is the Washington Football Team, which has won two more games this season and beat New York in their first meeting. The two teams also play one another next weekend, so Judge is taking shots at his upcoming opponent in the process.

If you want to read the whole thing, CLICK HERE.