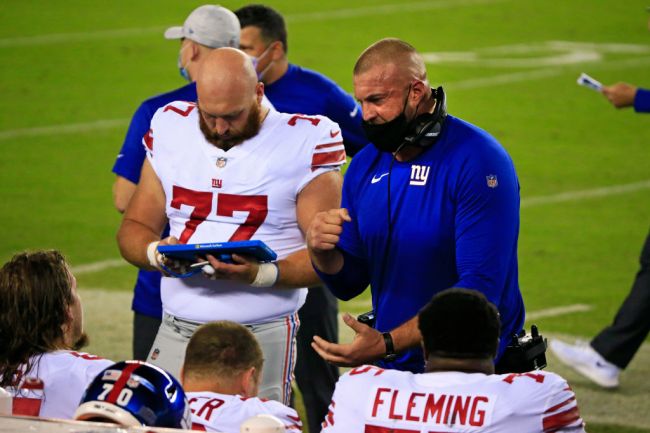 The New York Giants have won two games in a row and are still very much alive in the hunt for an NFC East title which is why the news of the team parting ways with offensive line coach Marc Colombo on Wednesday was a bit of a surprise.

Well, if Jason McIntyre’s scoop on the matter is accurate it’s pretty clear as to why head coach Joe Judge fired him. According to the Fox Sports writer and analyst, Judge and Colombo got into a legitimate fistfight on Wednesday morning and Colombo, who played 10 years in the league, got the better of Judge. The Giants have given up the third-most sacks in the league this season, but it’s safe to assume the alleged fistfight had a bit more to do with his firing than sacks allowed.

Pro Football Reference has Colombo listed as 6-foot-8, 320 pounds. I don’t know Judge’s exact height and weight, but I do know it is not that.

Punches thrown. I'm told Colombo got the better of him, and Judge fired him instantly. https://t.co/O2DmYNnkmW

According to Pro Football Talk, the Giants hired Dave DeGuglilmo to replace Colombo on staff. Colombo was in his first season with New York after spending the last four seasons as the o-line coach for the Cowboys under Jason Garrett, who is now the Giants’ offensive coordinator.

Kim Jones of the NFL Network reported that there wasn’t a fistfight between the two coaches.

I’m told there was no fistfight between Judge & Colombo. #NYG