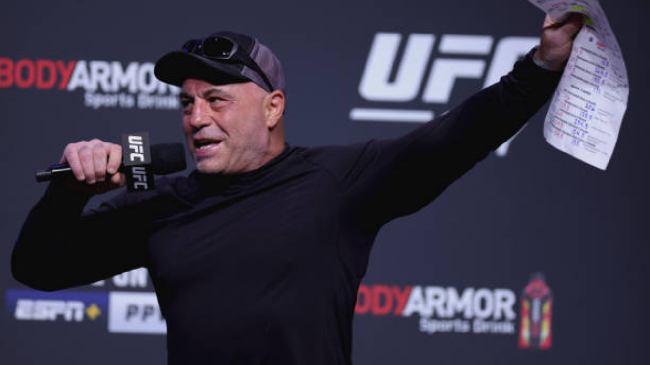 The idea of turning on a UFC pay-per-view and not hearing Joe Rogan’s voice is a strange one.

Rogan made his first appearance working for the UFC all the way back in 1997 at UFC 12. Fight fans are only about a month away from watching UFC 280. He wouldn’t begin his work as a full-time color commentator for the organization until 2002, but he has rarely missed a pay-per-view since then.

While it may be difficult to picture the UFC without Joe Rogan around, it’s something that was proven possible when his long-time commentating partner, Mike Goldberg, left the organization for Belabor after 20 years.

Over the past few years, Rogan has taken a bit of a step back from his role with the UFC, cutting down to only doing pay-per-views after years of also working as a commentator on nearly all Fight Night cards as well.

Now he has revealed exactly what set of circumstances would see his time with the UFC come to an end. According to Rogan, he has it in his contract that if Dana White ever leaves the organization, he’ll be leaving too.

It seems unlikely that Dana White would leave the UFC any time soon with the organization experiencing more financial success than ever in recent years, so fans shouldn’t expect to see Rogan leaving any time soon either.

Whether or not his continued presence on broadcasts is a good thing is something that fans will debate, though. Some like having the familiar voice on broadcasts as the UFC rotates through different crews every weekend and who value his years of experience in this role for the UFC.

There are others who believe he tends to bias his commentary towards one fighter or another during fights and that his commentary can be inaccurate at times.

Whatever the case may be, those fans will probably have plenty of time to continue debating it as it doesn’t seem Rogan is going anywhere any time soon.