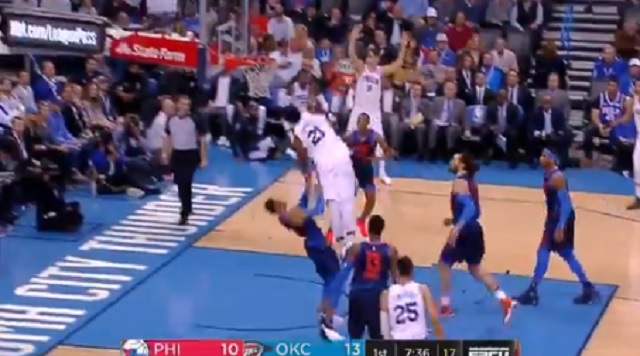 Philadelphia 76ers center Joel Embiid is not scared to talk trash to anyone even certified badass Russell Westbrook and that’s why we love him.

During the first quarter of their game on Sunday, Embiid threw down a poster dunk over the Oklahoma City Thunder guard, and stared him down as he ran back down the court.

At the end of the game a pissed of Westbrook stared down Embiid for a good 15 seconds as he dribbled out the clock.

Russell Westbrook wasn't too happy with Joel Embiid dunking on him so with the win locked down he stared right at Embiid to end the game. 😂😂😂pic.twitter.com/xSSVp00TLk

Westbrook’s intimidation tactic clearly didn’t work against Embiid who went on to troll Russ on Twitter with this hilarious tweet.

Oklahoma City may have won the game but it seems like Westbrook still took the L.