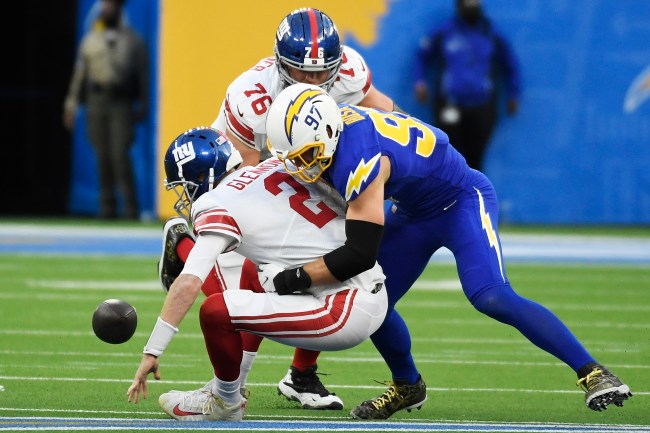 We’ve all been there. We all know that pain. There are very few things in the gaming world that hurt like being the last death in an online match and watching some 13 year old start tapping “circle” over your corpse.

The only thing could make it worse would be if you also happened to be the New York Giants. That’s just a miserable fate to endure right now.

You have spent recent drafts loading up on offensive players early in the draft and still have one of the league’s worst offenses. Your underachieving QB is hurt. The first rounder your fans didn’t want this year is injured. The running back you spent a top 5 pick on can’t stay healthy.

You’ve already fired your offensive coordinator and you’re staring down the barrel of your 5th consecutive losing season. Things just can’t get much worse.

The Giants were already having a miserable day in the middle of the 3rd quarter of Sunday’s game against the LA Chargers. Very little was going right for the Giants and the Chargers led 30-7. The Giants were facing a 4th and 9 from their own 49 when Joey Bosa strip-sacked Mike GLennon.

Then Bosa brought out the “tap circle” celebration like he was on a Call of Duty server at 2 am.

You have to admire the attention to detail here as he “accidentally” went prone in the middle of the celebration.

Shockingly, in a year where everything is taunting, Bosa was not hit with a flag on this one. The only possible explanation is the refs didn’t have a clue what he was doing.

We can confirm that was the case for the NFL’s Twitter page.

The NFL not realizing Joey Bosa was doing a teabag celebration then deleting the tweet is hilarious pic.twitter.com/OGSgYj3xdo

At least the NFL doesn’t understand how miserable it is to be a Giants fan right now.