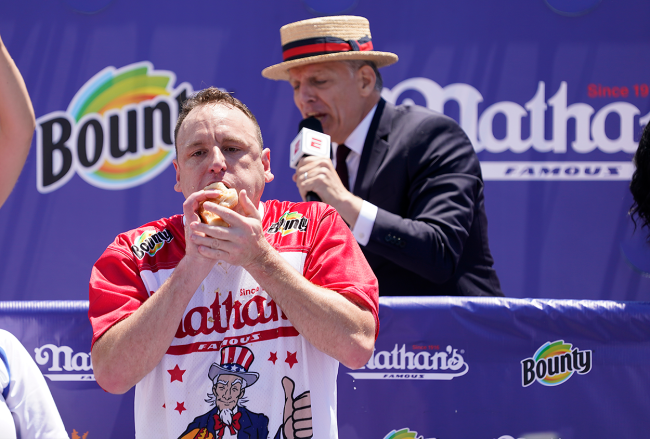 Monday was not Joey Chestnut’s best from a competitive standpoint. However, it may have been his most legendary.

On July 4, 2022, the 107th annual Nathan’s Hot Dog Eating Contest got underway on the corner of Surf and Stillwell in Coney Island. It got started with the women’s competition, in which Miki Sudo returned to defend her title.

After a year off for maternity leave, she returned to the top of the podium.

Miki Sudo looked pissed after winning her eighth #NathansHotDogEatingContest with 40 dogs in 10 minutes and this is why she’s the greatest to ever do it 👸🌭pic.twitter.com/M6CgLe8Tno

And then it was Joey Chestnut’s time to shine.

However, it came with a caveat.

Because of a leg injury, Chestnut had not been competing prior to the Nathan’s competition. He took some time off and was not in usual form. In fact, Chestnut got beat during the last competition in which he partook leading up to the 4th of July.

With crutches under his arms and a boot on his leg, was it the year that he would get beat?

Because of the slow year leading up to Monday, as Chestnut took the stage, his Over/Under was set at 74.5 hot dogs. It was an electric entrance.

This Joey Chestnut intro has me ready to run through a WALL 🗣pic.twitter.com/wNqMJ5SdKg

When things got underway, it was clear that Chestnut’s pace was slow out of the gate. He also encountered a setback.

Early in the competition, a protester/troll dressed as Darth Vader took the stage. Chestnut was not having it. He proceeded to rock his world.

JOEY CHESTNUT SENT THIS MAN INTO THE SHADOW REALM AND JUST KEPT EATING AS IF NOTHING HAPPENED 👑pic.twitter.com/uyqmo4EOD1

Although Chestnut was slowed down by Darth Vader, it did not stop him from winning.

Joey Chestnut’s got that dawg in him pic.twitter.com/b9M0uFmVPh