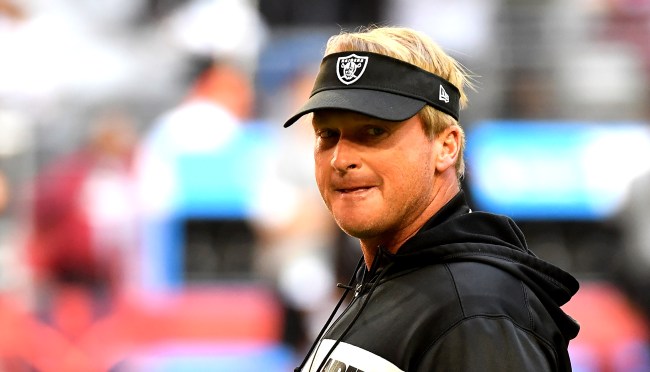 After a decent start to the season that had some wondering if they could contend for a wildcard spot in the AFC Playoffs, the wheels have completely fallen off the Raiders bandwagon, as they’ve lost four straight games, including their final two home games in Oakland.

This weekend’s loss against the Jaguars was particularly painful for the Raiders, though, as they not only blew a 13-point halftime lead as they were playing in front of their home fans for the final time but were partially undone due to an egregious out-of-bounds call by the refs.

As the Raiders were nursing a 3-point lead in the game’s closing stages, quarterback Derek Carr “was incorrectly ruled to have slid out of bounds, stopping the clock with 2:05 to play, essentially saving a timeout for Jacksonville,” according to ESPN.

Then, “after the Raiders were assessed a 5-yard penalty for delay of game while protesting the call, they faced first-and-15 from the 36-yard line.” As we all now know, the Raiders would then have to punt the ball to the Jaguars, who drove down the field to score the winning touchdown, denying Raiders fans the fairytale Oakland ending they’d hoped for.

Speaking to reporters during his Monday morning press conference, Gruden said that Al Riveron, the league’s senior vice president of officiating, had issued an official apology to the team. And while Gruden accepted the apology, he points out that it does nothing for his team.

“Derek was in bounds and that play cost us dearly,” Gruden said to reporters on Monday.

“They stopped the game in Indiana, took my middle linebacker away for 12 weeks, ended his season. They stopped the game in Kansas City and took [Trayvon] Mullen’s interception away. Why the hell wouldn’t you stop the game and get the clock right? I don’t think it was even close. So, I’m not happy about it. Apologies are great but this is 2020; I’ve been in enough meetings and I’m disgusted by it. I don’t want any instant replay in my life, personally, but if we’re going to have it, let’s use it properly. I don’t think it’s that hard to do.

The Raiders’ final season in Oakland closes out with two AFC West opponents, as they head to Los Angeles to take on the Chargers in Week 16 before going to Denver to take on the Broncos in Week 17.