Jordan Spieth Shares Insight Into Tiger Woods’ Mindset During Past Struggles, Says He’s The Only Golfer He Knows Who Never Gets Down On Himself 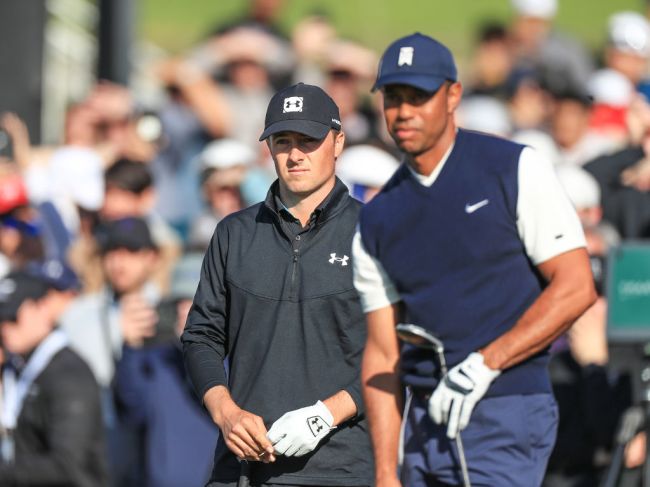 It’s not Tiger Woods‘ golf swing that has driven him to arguably becoming the greatest golfer in the history of the game. Sure, his distance off the tee back in the early 2000s, his deadly iron game, and the way he wields his iconic Scotty Cameron putter has pushed him to where he is today, but the deadliest weapon in his arsenal is what’s going on between his ears. Woods’ mindset, drive, and overall mentality are what put him above everyone else.

Woods is a straight-up assassin on the golf course. He not only wants to beat everyone else in a tournament field, but he also wants to beat the course itself. In order to do that, you have to have stuff figured out in your head, and it’s safe to say Woods has been able to work that out over the years.

Jordan Spieth recently joined the No Laying Up podcast and gave some insight into Woods’ mental game. While it’s every athlete’s goal to never get down on themselves, according to Spieth, Woods is the lone golfer he knows that’s actually able to do just that.

“He’s the only person I’ve played with that I can say that about, including myself. I just thought that that was so intriguing that I’ve never heard him say one negative thing about himself.”

As Spieth mentions, Woods does drop the occasional F-bomb, which every golf fan has heard over the years, but that’s just him simply showing frustration toward an outcome. Even Tiger makes bad swings, but his ability to move onto the next shot and truly forget about the last is a skill that has helped him to 82 PGA Tour wins and 15 majors.