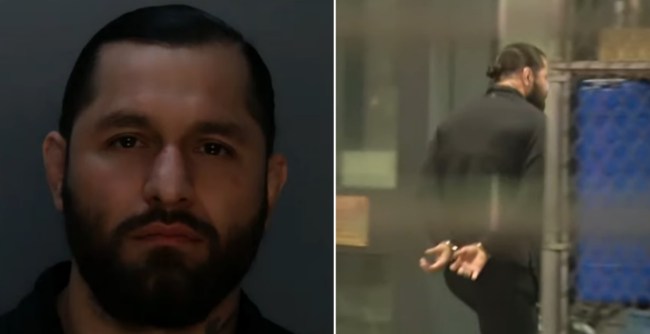 According to court records, Masvidal is being held on a $15,000 bond for the attack on Covington.

See reports and booking photo below for more details. pic.twitter.com/OkW6LbZQHn

Here’s video of Masvidal being booked by Miami Beach PD.

Exclusive @GamebredFighter headed to jail on an aggravated battery charge after his alleged attack on @ColbyCovMMA Exclusive video and story on @WPLGLocal10 pic.twitter.com/HGJhTz25Kj

According to reports, Masvidal allegedly wore a mask and a hoodie while waiting for Covington outside of Papi Steak. Covington told police that Masvidal sucker-punched him several times before fleeing the scene.

UFC star Colby Covington told cops Jorge Masvidal punched him in the face twice and fractured his tooth in an attack outside of a Miami hotspot on Monday night … police documents, obtained by TMZ Sports, show.

In the docs, cops say Covington told them as he exited Papi Steak restaurant, Masvidal “ran up to him from his left, and without notice, punched him with a closed fist two times in the face.”

Cops in the report say Covington told them one punch landed on his mouth, while the other connected with his left eye.

According to the docs, cops say Covington heard Masvidal yell, “You shouldn’t have been talking about my kids.”

Covington was hit in the mouth and eye. One of his teeth did break, cops say.