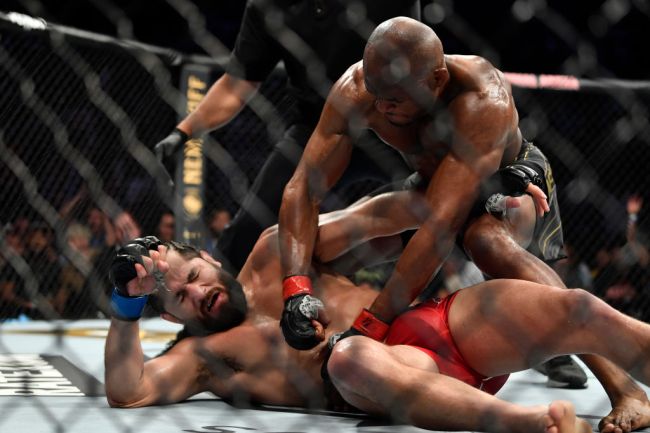 Often in MMA, after two fighters meet in the cage, they’ll come away with a newfound respect for each other’s skillsets. That’s usually especially true for the fighter who loses in any given matchup.

However, it would appear this isn’t the case for Jorge Masvidal.

Masvidal has lost his last 3 fights and hasn’t gotten a win since 2019, but that didn’t stop him from sharing his questionable opinion about the man who handed him 2 of those losses. In a recent appearance on Logan Paul’s “Impaulsive” podcast, Masvidal shared his belief that Kamaru Usman’s striking is “nothing special”.

“Oh, I know he’s beatable. There’s not a man alive that’s not beatable. Taking the second round out of it, the first round after I got up, I started landing some big shots on him. The second knee – the first knee I threw, he took me down. The second knee I hit him with right here on the chest, and my thigh hit him in the jaw, wobbled him a little bit. On the feet, he’s nothing special. He might have got me, but he’s nothing special on the feet. He’s not like a legit striker on the feet yet.”

This is a pretty ridiculous statement coming from Jorge Masvidal, who was knocked out cold by Usman a year ago and then followed that up by being out struck by Colby Covington. He’s not exactly in a position to be questioning Usman’s striking skills right now.

It’s also just a ridiculous assertion based off of Usman’s last 5 title defenses in which he’s stopped 3 opponents with strikes and won a striking battle in a 4th.

There’s no reason to believe that a third fight between Usman and Masvidal would be any more competitive than the first two, but at least now we know that Masvidal is completely outmatched by an opponent whose striking is “nothing special”