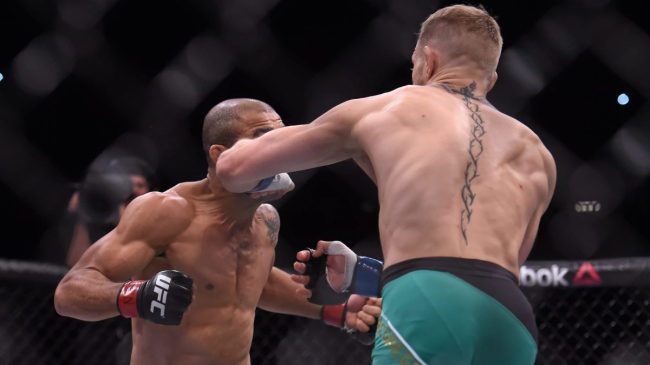 Conor McGregor has a plethora of memorable moments from a remarkable UFC career. But perhaps no moment in his career was as iconic as his first-round, first-minute knockout of UFC legend Jose Aldo to win the UFC Featherweight championship.

Many consider Aldo the featherweight  GOAT. He was undefeated in the UFC prior to the fight and had won 18 consecutive fights prior to squaring off with McGregor.

Fans were calling the fight between the two superstars one of the biggest in UFC  history. Then, in a flash, it was over. McGregor landed a left-hand counter that put Aldo to sleep just 13 seconds in the fight. The victory cemented him as the division’s undisputed champ and was perhaps the peak of an incredible five-year stretch.

Some would think that the loss would cause Aldo to harbor ill-will toward McGregor. But it seems that’s not the case.

Aldo went on the Brazillian podcast Connect Cast recently and opened up about the loss to McGregor. One of the things he surprisingly revealed was that the two fighters are actually pretty friendly with one another.

“It was funny because the guy drinks a lot. He drinks a lot. Fu*k yeah, he probably even likes to drink gasoline,” Aldo started. “Bro, he would call our private jet completely drunk, just talking shit. Fu*k, it was so funny. He’s a good person. Because he does understand the other side. He understands the other person. But he’s a guy with vision.”

Aldo was then asked about what happened in the fight. He said the loss was meant to happen and that McGregor earned it.

“It was his merit. I was going in, and, like it or not he has more reach than me. He had throw a 1-2 already that I dodged very quick and answered very quick and he got spooked. I said ‘now it’s time to go in Mike Tyson style, brother.’ When I went in, straight away everything was spinning. I was like, ‘fu*k.’

It’s clear that Aldo has great admiration for his fellow UFC legend. The two have since gone in separate directions, with McGregor fighting at lightweight and welterweight while Aldo is now at bantamweight.

But they’ll always be connected as two of the best featherweights to ever do it.