Want To Get Jacked Like MLB All-Star José Altuve? Here’s The Full-Body Workout He Uses To Stay Strong 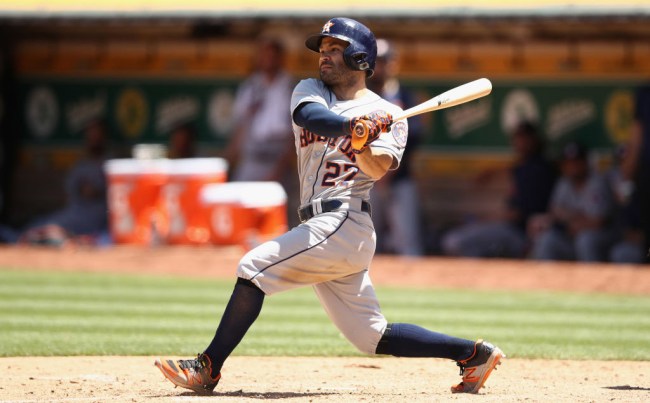 Good things come in small packages, right? Well, Houston Astros All-Star second baseman José Altuve might be small at just 5-foot-6, but he is most definitely mighty. How many other guys his size can say they have won won three batting championships and hit 24 home runs each of the past two seasons – seasons in which he went to his fifth and sixth All-Star Game.

And speaking of the MLB All-Star Game, Altuve just played in his seventh one this week (he was the leading vote-getter) as he leads the league with 123 hits and is batting .332 with 9 homers, 63 runs, and 14 stolen bases so far this year. Not bad for an undrafted free agent from Venezuela.

So how does a little guy like him manage to not only handle an ever-lasting 162 game schedule (not counting all the playoff games he’s played in) and still put up the eye-popping numbers he does? Well, it might have something to do with the full-body workout regimen he follows and shared with the fitness experts over at Men’s Health.

“I’m not a big guy. I’m only 5’6″, but usually if I’m able to squat and I have that routine in my daily basis, I feel like I can create some power. Not by trying to swing hard, just by trying to tune everything in my lower body.”

“It doesn’t help me to get better or hit for power or be faster, but it helps me to stay healthy,” Altuve he said. “That’s one of my favorites to do because it goes right in my hamstrings and it helps when trying to stay healthy for 162 games.”

“We’ll do it 70 to 80 percent,” Altuve says. “You don’t want to kill yourself, but at the same time, you want to make sure your legs are ready for the game.”

Pushing each other every single day @josealtuve27

He also does this…

For more details on this workout plan as well as Altuve’s hitting and fielding advice for baseball players, click here.

If you want to learn even more about how other famous people train, peep these workouts and diet plans…