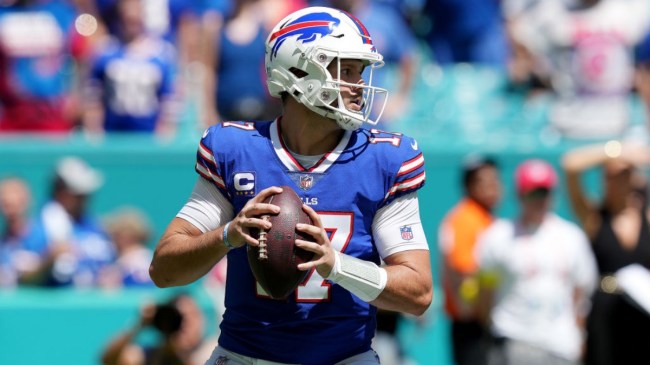 Things got a little bit weird during Sunday’s matchup between the Miami Dolphins and Buffalo Bills. No, I’m not talking about the “Butt Punt”, but instead the incident between Josh Allen and Christian Wilkins.

After ending up in a pile in the 4th quarter, Allen was flagged for ripping Wilkins’ helmet off.

When he got out of the pile, Allen seemed to indicate to the refs that Wilkins had grabbed his crotch.

Today, Allen discussed the incident with Wilkins in an appearance on Kyle Brandt’s Basement.

"There were some things I didn't appreciate down there that was going on." – @JoshAllenQB on his heated exchange with Dolphins' DT Christian Wilkins

Um… I think anybody with two eyes could see what was going on under that pile. Obviously, I let the emotions get the best of me, but there were some things I didn’t appreciate down there that was going on. And we’ll let everyone make their own judgements for that.

Brandt then brought up Wilkins’ reaction to the incident. Wilkins said, “With alpha males that’s how it goes.”

To that, Allen responded, “Not typically… it is what it is. He’s a competitor and he’s been known for that going back to college. So, I should know that and shouldn’t let it get the best of me. But it just does… sometimes you see red and things like that happen.”

The incident in college that Allen is referring to is when Wilkins grabbed the crotch of Curtis Samuel during a game between Clemson and Ohio State.

With another game between the Bills and Dolphins this season, this strange saga is surely far from over.