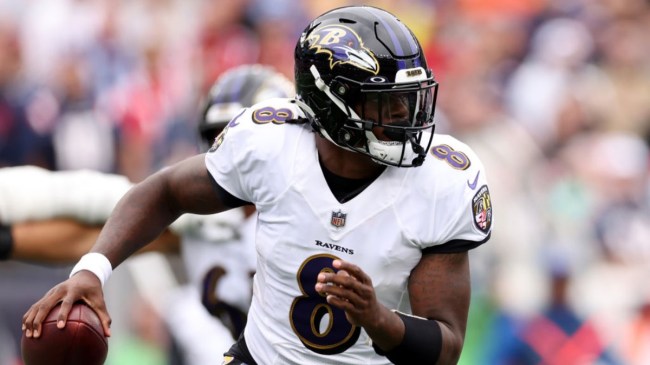 Lamar Jackson’s contract talks with the Baltimore Ravens were one of this football’s most surprising stories this offseason.

It had been the assumption among fans for some time now that the Ravens would jump at the chance to get Jackson signed to a long-term extension whenever the opportunity arose, but they were surprisingly hesitant to meet his demands this offseason.

Now, Jackson’s deadline for negotiations and has come and gone, leaving him without a contract beyond this season.

This weekend, Jackson takes on Josh Allen and the Buffalo Bills. Allen was drafted in the same class as Jackson and signed a huge contract extension a year ago.

Today, Allen shared his thoughts on Jackson’s contract situation, revealing that he believes Jackson’s decision to bet on himself will pay off.

Josh Allen believes Lamar Jackson's bet on himself will pay off. The real question isn't if, but when? https://t.co/bPfc7kirNl

He’s won an MVP and he’s playing at an MVP level right now. Given all the drama and details that are going on with all that contract situation he’s got going on, he’s just like, ‘You know, I’m gonna bet on myself.’ And I’m pretty sure it’s gonna pay off.

One way or another, there’s no doubt that this move will pay off for Jackson as long as he can avoid a major injury. After this season, the Ravens will either have to give Jackson a massive, fully-guaranteed extension or use the franchise page to keep him. Either of those options will be very lucrative for Jackson.

So far this season, he’s probably even driven up his price tag even more, having thrown for 10 touchdowns, rushed for 2 more, and posted a pair of 100-yard rushing performances in just the first 3 games of the year.

Jackson’s bet on himself should pay off in a big way if he keeps playing like this.