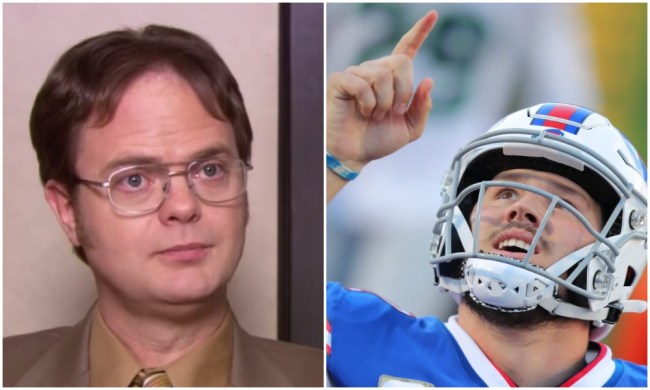 Josh Allen put on a show during the Bills’ 34-24 win over the 49ers on Monday Night Football. In fact, you could make the argument that it was the best performance of his career. The 24-year-old went 32-for-40 through the air for 375 yards, four touchdowns, and zero interceptions.

Thanks to Allen’s big-time outing, the Bills held onto the top spot in the AFC East standings and while all of that is well and good, perhaps the best thing to happen to Allen took place after the game on Twitter.

Rainn Wilson, who you know as Dwight Schrute from ‘The Office‘, tweeted out that Allen was his second favorite quarterback. Allen then hit him back with a perfect, very on-brand Office tweet asking if he was the assistant favorite QB or the assistant to his favorite QB.

It’s good to know Allen has good taste in TV and is a fan of one of the greatest shows ever created.

Assistant favorite Qb, or assistant to your favorite Qb? https://t.co/LCl34Emxum

For anyone out there that hasn’t watched ‘The Office’ all the way through seven times in their life like yours truly, that’s a running joke in the show with Dwight saying he’s the assistant general manager while Jim Halpert always takes jabs at him calling him the assistant to the general manager.

Wilson is a Seahawks fan himself having been born in Seattle and attending the University of Washington. So for Dwight Schrute, Russell Wilson holds the top spot in his NFL quarterback rankings but Allen has now secured the No. 2 position.