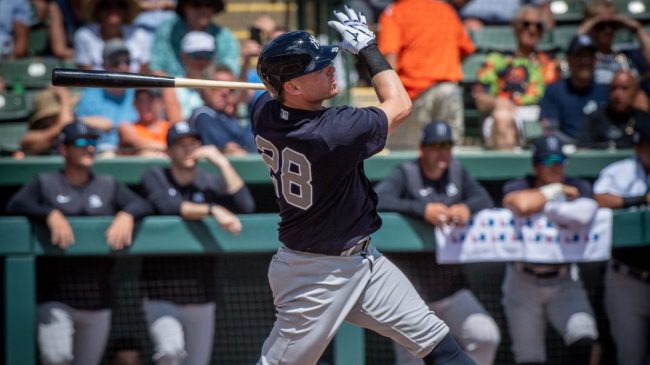 The New York Yankees are taking on the Pittsburgh Pirates in Spring Training action this weekend.

And things have gotten started with a huge bang.

New addition Josh Donaldson led off the outing for the New York lineup, taking to the dish in the bottom of the first inning. The third baseman absolutely crushed the third pitch he saw from Pirates pitcher Jose Quintana, sending the ball off video board in left field.

The round tripper nearly left ballpark altogether, and it marked Donaldson’s second home run of the preseason. Check out the moonshot below.

This ball travels so high it could bring rain. Donaldson knew it was gone the moment it left his bat, and he made sure to take his time getting out of the batter’s box.

According to MLB insider Bryan Hoch, the ball went 418 feet, leaving the bat at more than 107 MPH.

A few innings later, Aaron Judge got in on the action. He turned this fastball around quickly, sending it over the batter’s eye in centerfield.

It was the third solo home run of the day for the Yankees lineup, but it wouldn’t be the last.

Marwin Gonzalez wrapped a towering drive around the right field foul pole, sending yet another baseball out of the park.

New York’s sluggers look primed for a breakout season, and they’ll need all the power they can get when competing with the likes of Boston, Toronto, and Tampa.

The Yankees will get the season started on April 7th with an opening day matchup against the hated rival Red Sox.