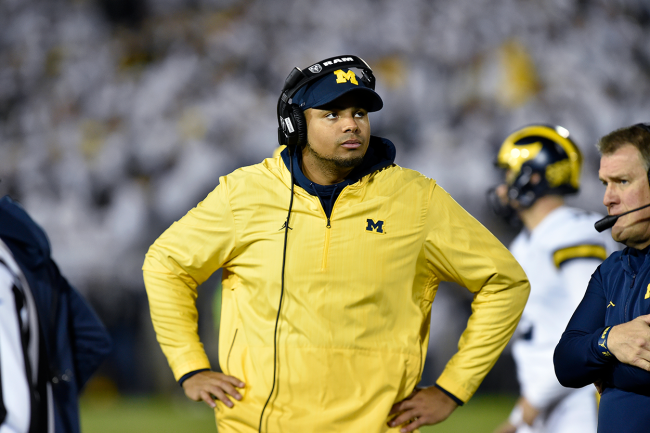 Michigan head football coach Jim Harbaugh thought that he was headed to Minnesota to take the same job with the Vikings. Instead, he has to replace both of his coordinators in February.

Needless to say, something is going on in Ann Arbor and it’s not particularly positive. And the way that Gattis left certainly didn’t help the optics.

On his way out of Michigan, Gattis sent a cryptic text message to his players.

Here is what he said:

“Fellas, it’s with a broken heart i write this. I am resigning my position here at Michigan to go to another university. I have given everything i have to you guys and michigan. I sacrificed so much personally to stand in the fight with each of you which i would never take back. Unfortunately the past few weeks has told a different story to me about the very little appreciation i have here from administration.”

“In life i would never advise anyone to be where they are not wanted and i owe that to my family and my integrity to hold myself to this standard! I Love each and every one of you to the bottom of my heart. Our memories will never be forgotten but our struggles is what makes us who we are today it’s what grew this love and will forever hold it together! i am the biggest fan of you, and biggest friend of you. Most importantly I am one phone call always if you need anything ever. Love you guys!”

Gattis’ text includes a text about not being wanted.

Now, the Michigan staff has been prepared for Gattis to potentially leave since early December. At the time, he met with the University of Virginia about the school’s head coaching vacancy.

The difference now, of course, is that he left for a lateral move. Speculation about Gattis’ message has led to a few theories.

The first is that he simply wasn’t happy of late and wanted a way out. The second is that he just followed the money, although his contract details with the Hurricanes have not yet been released.

In addition, there is a theory about the head coach. When Harbaugh interviewed with Minnesota earlier this week, there is thought that he fully expected to leave.

As a result, Gattis may have hoped to take over for Harbaugh. However, athletic director Warde Manuel likely had other plans for the vacancy if Harbaugh was to leave.

That may have led to Gattis feeling as though he is “not wanted.”

Regardless of the reason, Gattis’ text to players is not a great look. He thanked them for everything, but made it clear that there was something going on behind the scenes— whatever that something is.