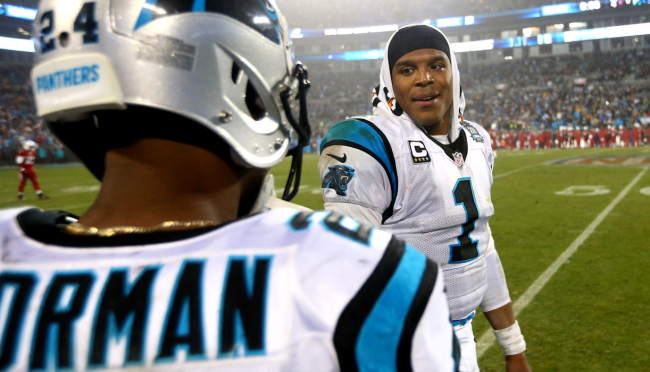 The 2015 Carolina Panthers were arguably the best team in the NFL that year. The Panthers went 15-1 in the regular season, they won their first two playoff games including a 49–15 drubbing of the Arizona Cardinals in the NFC Championship Game.

Unfortunately, Carolina ended up losing 24–10 to the Denver Broncos in the Super Bowl, becoming, at that time, the fifth straight team to have at least 15 regular season victories and not win the Super Bowl. So they are largely forgotten.

One thing that many NFL fans have not forgotten about that 2015 Panthers season, however, is the training camp brawl that took place between the team’s star cornerback Josh Norman and its franchise quarterback Cam Newton.

That subject once again reared its ugly head in an interview Josh Norman recently gave to VladTV. In it, Norman explained what really happened that day to cause fisticuffs to break out between the Panthers’ stars.

“We ended up having that moment where in practice, like, Cam just was like torching us one day,” said Norman. “And it wasn’t really torching us, we just weren’t playing up to what we normally would do. We just basically rolled up out of bed and showed up. We didn’t brush our teeth. We didn’t wash our face. We just went out there early and just showed up.

“And so when that happened, he was yelling and all this and like hitting us. And like, hold on. Wait a minute. Like, we gotta check ourselves. We are the number one defense in the league, like, let us go back and do this over. Let us brush our teeth and wash our face and get us together, ya know? And so when that happened, Thomas Davis, Luke Kuechly, guys looked at each other like, Kurt Coleman looked at each other and Roman Harper, ‘Yo, let’s get our stuff together.”

Norman continued, “So we did, we buckled up. I came in the slot. I ended up going against Philly [Brown] and so he ran a route, I undercutted it. I saw it kinda the whole way. Cam threw it, because he was getting pressured upfront. And so I end up picking it off, got it, ran all the way back. Cam came by, I stiff-armed him in the face and literally went into the end zone and slammed the ball and was like, ‘Aight, now what?’

“I had a flashback. So we basically at each other’s face. And so I grabbed his face mask and I pulled him down to my level. And so he grabbed me. And then I end up hip-tossing him. That’s probably why you saw his helmet coming off.”

Norman said that he and Newton talked about the incident later in the showers and determined that something like that was only going to make them stronger as a team, and as individual players.

Turns out they were right because it was the best season Carolina has ever had, Norman was named AP Defensive Player of the Year, and Newton was named the NFL MVP.