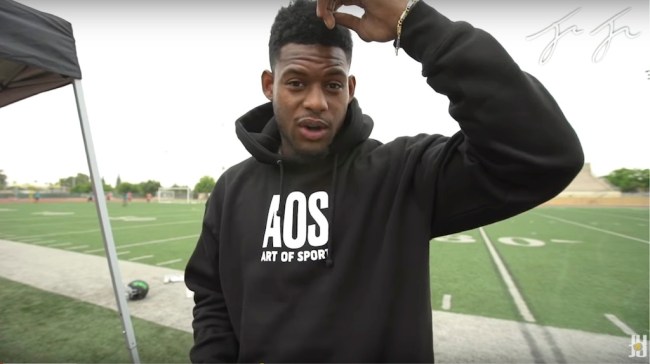 After it was announced that someone in South Carolina won the 1.6 billion Mega Millions jackpot, I swear to you that this is the last post I’ll write mentioning the crazy trend that buying tickets turned into. You, me, all of use probably found ourselves standing in line hoping to score the billion-dollar winner, yet, some lucky son-of-a-bitch in the Palmetto State ended up walking away with all that cash. Bummer.

That said, while all of us normal guys were dropping our hard earned cash on Mega Millions tickets, it turns out that a few pro athletes were actually doing the same. Hey, dudes have to get paid, right?

Well, one of those pro athletes vying for the record-breaking Mega Millions jackpot was Pittsburgh Steelers stud receiver JuJu Smith-Schuster. In fact, the second-year pro wanted to win the billion dollars so badly that he spent $120 on tickets the day of the drawing. Forget the fact Smith-Schuster is “only” making about $655,000 this year, per Spotrac, so the billions sounds much cooler than the hundreds of thousands he’s currently earning.

JuJu Smith-Schuster bought 100-plus Mega Millions tickets this week. As his interview concluded, he said, "I tried to win it so we could get Le'Veon back. It didn't work."

OK, so JuJu was probably joking a bit, but, hey, who knows, had he won he may have tossed a couple extra millions to the family who owns the Steelers, the Rooney’s, hoping the additional cash could get Bell back to the team. I mean, Le’Veon Bell’s losing out on a gnarly $850,000 per week by not signing the Franchise Tag being offered to him by the Steelers, so, yeah, Smith-Schuster’s billions would probably help lure the three-time Pro Bowler back.

Guess we’ll never know if JuJu’s ploy would have worked since he didn’t win. Well, unless he tried his hand at tonight’s $620 million Powerball jackpot, which, in that case, might have ended with much better luck.