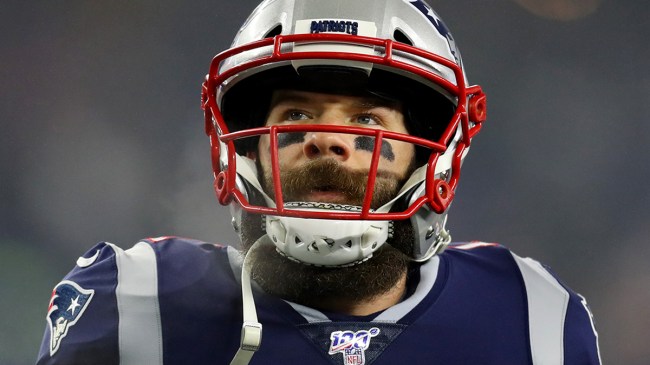 Tom Brady and Bill Belichick understandably get the bulk of the credit and praise for transforming the New England Patriots into one of the most formidable teams the NFL has ever seen during a dynasty that spanned close to two decades.

With that said, they obviously got plenty of assistance from the many other people who played an instrumental role in helping the team appear in the Super Bowl on nine different occasions and bringing the Lombardi Trophy back to Foxborough five times between 2002 and 2019.

That includes Julian Edelman, the Deceptively Athletic Student of the Game who spent the entirety of his 12-year NFL career playing under the watchful eyes of Brady and Belichick in New England.

The wide receiver was one of Brady’s favorite targets during his time with the Patriots. The 6,822 receiving yards and 36 touchdowns he recorded in the regular season before hanging up his cleats may be fairly modest compared to some of the all-time greats at his position, but Edelman remains second only to Jerry Rice when it comes to the number of passing yards and receptions he was able to rack up in the postseason before retiring.

Interestingly enough, Edelman only scored six touchdowns in the playoffs. The last of those came on a five-yard reverse into the end zone during New England’s losing effort to the Titans in the wild card round in 2020, which drew plenty of praise from Tony Romo thanks to the seemingly deceptive nature of the “Patriots Special” that appeared to hinge on the widout initially lining up in the wrong spot to confuse the defense.

However, that was decidedly not the case based on what Edelman shared during an appearance on Inside the NFL in a clip that was filmed last year but made the rounds after resurfacing on Monday.

During the discussion, Chris Simms asked how frequently he forgot what play was being run during a game, and the retired wideout admitted he fell victim to a brainfart on the aforementioned play, saying:

“Tom’s last year, where we ran the reverse.

We ended up scoring a touchdown. I watched the TV cut of Tony Romo’s over there like, ‘Look at how they’re intertwined and acting this one out. I’m like, ‘I didn’t know!'”