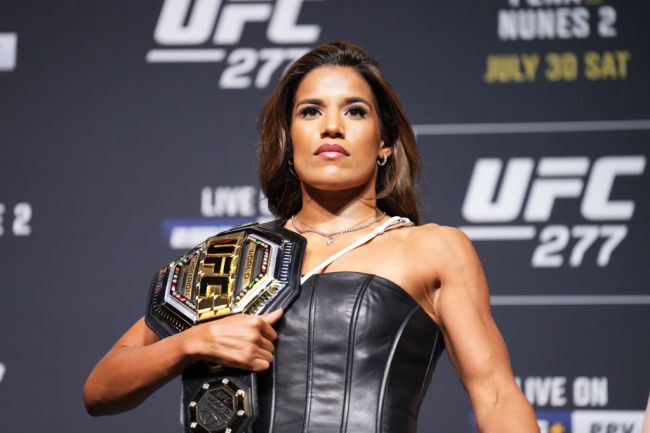 Back when the UFC signed Cris Cyborg, there was one major problem facing the organization. Cyborg had spent her whole career fighting at 145 pounds, but the UFC didn’t have a weight class above 135 for women at the time.

It has now been 3 years since Cyborg last fought in the UFC and the organization seemingly has the same problem. The UFC did attempt to put together a division and the division has had a champion for 5 years now.

However, that division has never had enough fighters in it to actually putting a rankings list. Every week, when the UFC puts out its updated fighter rankings, the Women’s Featherweight division only ever lists its champion, Amanda Nunes, and enough blank space under her name for 15 contenders that the UFC doesn’t have.

Yesterday, at a press conference for Nunes’ title rematch against Julianna Peña, the subject of Nunes going back up to 145 to defend her belt came up and Peña absolutely roasted the whole division.

Peña is absolutely right about the division. Amanda Nunes has only taken on 2 challengers in the 145 pound division since she won the belt three and a half years ago and she was an enormous favorite to beat both of them.

After dispatching those two opponents, the only women left to fight in the division would all have to come up from 135 pounds to fight her. Women’s 145 is easily the weakest division in the UFC and it’s really unfortunate that it might be the optimal weight class for Nunes at this point in her career.

Despite Peña’s feelings on the division, she can make it so that Nunes’ only option after this weekend is to move up to defend that belt. Another title loss for Nunes would likely take her out of contention in the division for the time being, making it make way more for the UFC to have her defend a belt in a higher weight class than to take non-title fights at 135.

At the end of the day, she’d probably be fighting the same opponents either way.