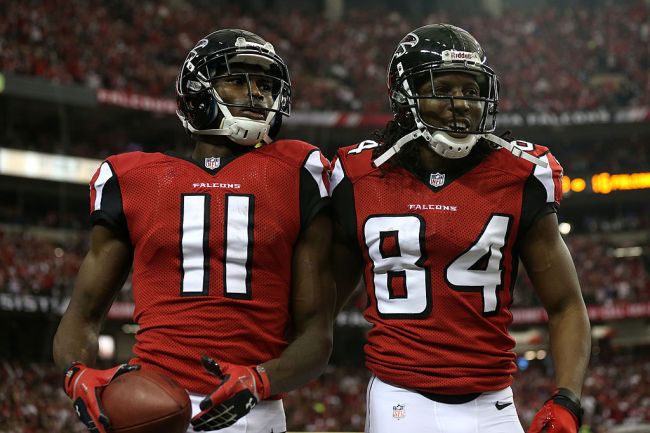 Former Atlanta Falcons teammates Julio Jones and Roddy White are being accused by a cannabis company of defrauding millions of dollars in stolen cannabis that they claim was sold illegally.

According to Larry Brown Sports, Jones and White allegedly conspired with another man to sell hundreds of pounds of the company’s cannabis meant to be sold legally on the black market.

Exclusive: Julio Jones and Roddy White are being sued by a cannabis company that alleges the NFL players went behind their back to illegally sell hundreds of pounds of cannabis on the black market https://t.co/dHsqsq7Ol4

The business says it intended to take part in a legal cannabis operation, following the guidelines in California.

Genetixs leased a facility in Desert Hot Springs, Calif. in Feb. 2020 where they intended to cultivate and grow cannabis in accordance with state regulations. However, the complaint alleges that things went wrong when Genetixs hired a man named John Van Beek to oversee the buildout and management of their facility.

Not only is Van Beek accused of charging excessive money for the buildout and giving money to his son’s construction company, but he also allegedly began to breach his duties. Genetixs accuses Van Beek of failing to provide budgets, expenditures, invoices, and other business-related paperwork. State inspections of the facility made note of numerous violations at the facility. Van Beek was terminated in March, 2021.

Genetixs alleges that Jones and White, who were teammates on the Atlanta Falcons for five years, went behind the company’s back to work with the Van Beeks. The Van Beeks allegedly cultivated and grew cannabis for sale on the illegal black market, enriching themselves and Jones and White. The Van Beeks disconnected cameras in the facility, began squatting there, and prevented a new manager from entering the facility, according to the complaint.

The lawsuit goes on to say that Van Beek has not reported any sales to Genetixs since March and allegedly “looted, removed, and misappropriated” cannabis from more than 22 harvests in conjunction with white and Jones. The company estimates about $3 million in cannabis has been harvested and sold illegally per month.

Genetixs estimate about $3 million in cannabis has been harvested and sold illegally per month since then.

The Van Beeks, in connection with White and Jones, allegedly abandoned the Genetixs Cannabis Facility and surrendered the premises to the landlord. Before doing so, they allegedly “looted, removed, and misappropriated” Genetixs’ cannabis derived from more than 22 harvests. They allegedly removed and misappropriated machinery, equipment, and fixtures located within the facility that are worth millions.

Jones, White, Van Beek and others are currently being sued by Genetixs for conspiracy to defraud, aiding and abetting, breach of duty of good faith and fair dealing, unjust enrichment, breach of contract and are seeking punitive damages for money lost in the operation.