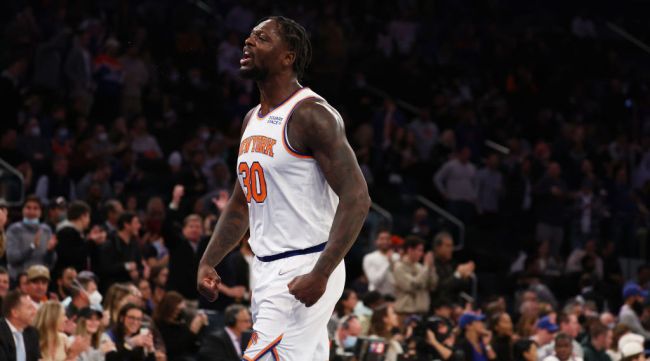 The New York Knicks earned a big win over the Denver Nuggets on Thursday night. However, Jalen Brunson surprisingly dunked the ball in the fourth quarter. After the game, Julius Randle clearly didn’t believe his teammate dunked the ball until he watched the tape himself.

During the postgame interview, the Knicks’ power forward admitted he didn’t believe Jalen Brunson after he told him he dunked the ball. Luckily, the media clarified it for him. Even so, it’s still hilarious that Julias Randle refused to believe it in the heat of the game.

“He said he dunked…I didn’t see it. Did he really? Wow…I don’t believe it. I didn’t know what he was talking about. He was like ‘I had to dunk that for you when you dove like that.’ I’m like bro, you did not dunk”

At the end of the day, it was a brilliant heads-up play by the Knicks there. Randle out-hustled Kentavious Caldwell-Pope for the loose ball then Brunson kept the energy going in the stadium with a jam (more of a rim grazer, but hey, it was impressive nonetheless).

Maybe this is the type of play we can expect more from the Knicks. This team is hard to beat when Julius Randle plays the way he did against the Nuggets. New York is just above .500 right now and seem like solid contenders for the postseason.

We’ll see if they can keep up the energy on Friday, as they face off against a struggling Golden State Warriors team.