Justin Fields Has Thrown One Less Touchdown Than Incompletions 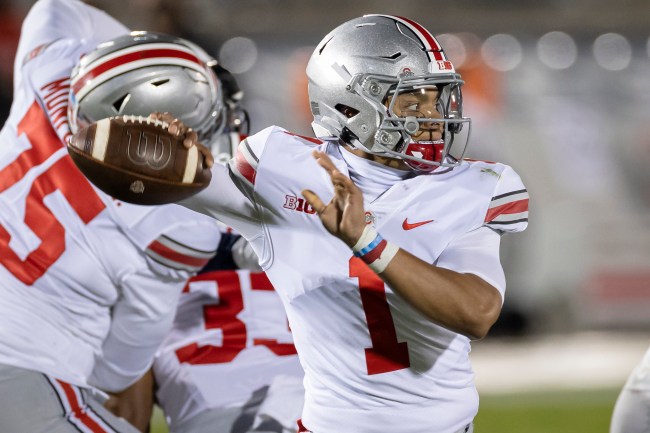 No. 3 Ohio State football is 2-0 after Saturday’s 38-25 win over No. 18 Penn State behind the arm (and legs) of quarterback Justin Fields. The 6-foot-3 Georgia native transferred from Athens, Ga. to Columbus, Oh. before the 2019 season and threw for 2,953 yards and 40 touchdowns last year.

His 2020 season is off to a hot start and Fields is firmly in the conversation for the Heisman Trophy. His 10-game, conference-only schedule is far from over, but the numbers he has put up in the first two weeks are incredible. After beating Nebraska 52-17 in Week 1, Fields continued his success with 318 yards and four touchdowns on 28 completions against Penn State on Saturday, bringing his total on the season to unmatched heights.

Look closely at his stat line. Fields has completed all but seven of his passes and thrown six touchdowns. For all but one incompletion, there is a touchdown to match. That’s crazy. His athleticism is unmatched and he is continuing to solidify his case to be a top-five draft pick in the spring.

Ohio State will have Rutgers, Maryland, Indiana, Illinois and Michigan State over the next five weeks before ending the year with its rivalry bout with Michigan on December 12. The Buckeyes have only played two games, but the eye test shows that running the table and winning the Big 10 title game is not out of the realm of possibility. Losing running back J.K. Dobbins to the NFL is a blow to the run game, but Fields has looked good enough to carry this team on his talent alone— his talented offensive line and receivers are just an added bonus.