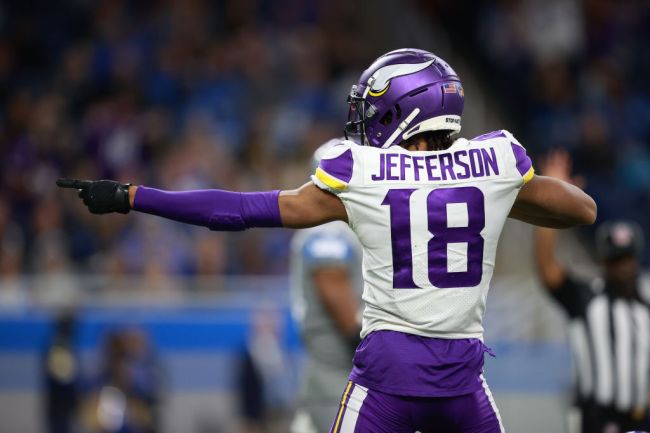 Justin Jefferson has had an unbelievable first two years of his NFL career. Through two seasons, he has racked up 196 catches for 3016 yards and 17 touchdowns for the Minnesota Vikings. Those numbers are among the best all-time for players through two season and already have him established as one of the NFL’s best receivers.

Based on what he had to say during an interview on NFL Network, his numbers could get even better next season. During the interview, he was asked about the offense under the Vikings’ new offensive coordinator and revealed that they won’t be a run-first offense anymore.

“I want to accomplish so much… At the end of the day I want to be a Hall of Famer.”

“Our offensive style, it’s not a run-first offense anymore. Just us being able to put different people in different positions and distribute the ball, really. I’m so excited in this offense. Us just being in OTAs, learning the plays, going through it with our defense, and stuff.”

Justin Jefferson in a pass-heavy offense is a scary thought and it’s a transition that makes a lot of sense for the Vikings. Their passing game looked strong last season with Kirk Cousins throwing for 4221 yards and 33 touchdowns. KJ Osborn established him as a solid 3rd option last season behind Jefferson and Adam Thielen and they’ll get Irv Smith back next season.

With Dalvin Cook’s injury history it also makes sense to try and get him more touches in space to replace some of his runs up the middle.

A pass-first Vikings offense could be a very exciting one to watch during the 2022 season.