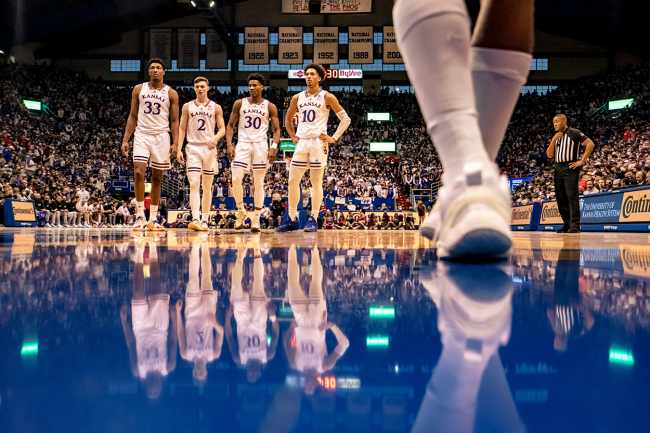 When it comes to college basketball, there has not been a more consistent team than the University of Kansas. The Jayhawks, between head coaches Roy Williams and Bill Self, are in the middle of the nation’s best tournament streak.

Kansas, which earned a No. 1 seed after winning the Big-12 Conference, will face No. 16 seed Texas Southern on Thursday night. It marks the school’s 32nd-straight NCAA Tournament appearance— excluding the COVID-19 cancellation in 2020.

With this year’s birth, the Jayhawks are amidst the longest streak in NCAA history. North Carolina made 27-straight appearances from 1975 through 2001, but Kansas’ ongoing streak is currently five years longer.

In addition, the current streak is the longest-active streak in the NCAA. Michigan State has made 24-straight appearances, Gonzaga has reached 23-straight, and then North Carolina has the fourth-longest active streak at 11-straight.

The Jayhawks have reached at least the Final Four seven times in that window, and won one national championship in 2008. They are in prime position to reach the Final Four again in 2022, with the top seed in the Midwest Region.

To put Kansas’ impressive streak in perspective, the school’s athletic department tweeted out a unique perspective. Nowadays, March Madness brackets are predominantly picked online and the pools are hosted on platforms like ESPN, CBS and Yahoo.

Ever since the very first online bracket was picked, Kansas was involved.

No one has ever done an online @MarchMadnessMBB bracket that Kansas wasn’t on.

The Jayhawks are not poised to slow down any time soon, so this impressive streak could continue for quite some time.