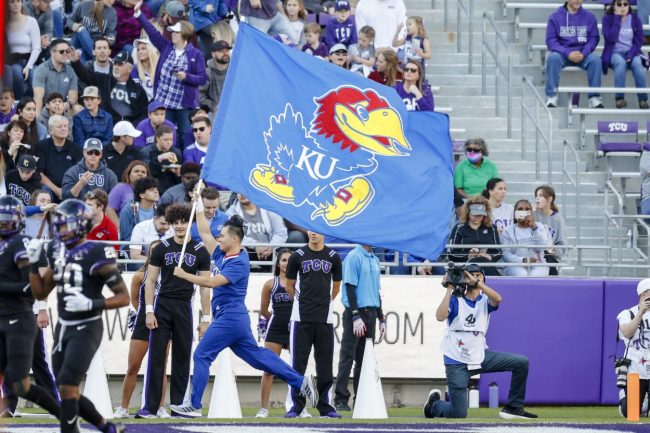 Back in June, quarterback recruit Ethan Vasko committed to Old Dominion. However, days after leading Oscar Smith High School to its second-straight Class 6 Virginia state championship, he flipped to the University of Kansas.

Now he is going viral for a hilarious trick shot video where he tried to show off his accuracy.

Vasko, a three-star recruit from Chesapeake, stands 6-foot-3, 180 pounds. He had previously picked up offers from Charlotte, Connecticut, South Florida and Virginia Tech, but chose the Jayhawks.

While leading his team to back-to-back state titles, all Vasko did was win. went 35-3 as a starter, broke a Virginia High School record with 10 touchdowns in a single game, accrued 9,203 total yards and 134 total touchdowns.

Needless to say, he was quite the talent on the high school level. Kansas, which enters the year with a quarterback battle ahead, is hopeful that Vasko could blossom into a star on the collegiate level.

In fact, he has recently gone viral for his accuracy. Kind of.

Vasko, credit to him for the self-deprecating humor, tried to pull off a trick shot. To do so, he had a girl wearing a Kansas sweatshirt, who is presumably his sister, stand at with a bottle atop her head.

Vasko set up at a distance and hurled the pigskin in her direction, with intent to knock the bottle off of her head. That is not what happened, take a look:

While the video itself is funny, it is even funnier because it is a Kansas commit. Hopefully Vasko can turn things around when he arrives on campus.