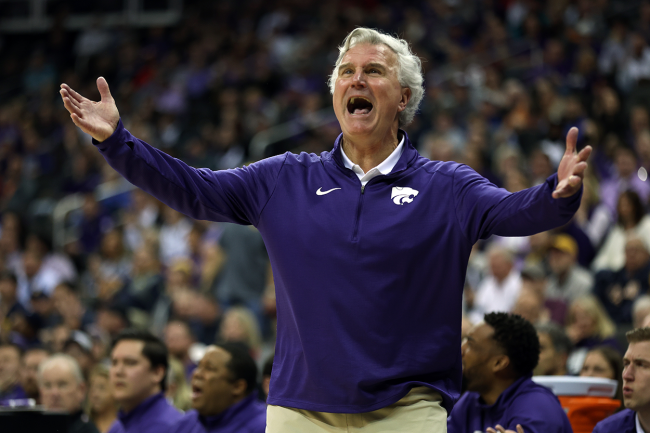 His decision to step away from Kansas State was likely encouraged by the university so that he would not be straight-up fired, but the 65-year-old seemed to know that Wednesday was the final day of his 10-year run in the Little Apple. Weber was very emotional in his postgame press conference.

Here's the full six minute response from Bruce Weber when asked if he had anything to say if this was his last game at K-State. Really starts to get emotional around the 3:40 mark and goes into detail about how he got his start in coaching.

In addition to his preemptive farewell speech and reflection, Weber made a very big statement and took an indirect shot at in-state rival Kansas. He wanted to let everybody know that he and his program did things the right way while he was in charge.

Weber also explained why his hair saw significant growth over the course of the last year or so and it is for an incredible reason. He was refusing to cut his hair until the NCAA did its job and punished programs for alleged cheating and violations.

“We did it the right way,” Weber said. “We did it with our guys graduating. … I’m on the NCAA ethics committee. And on the meetings, I was told that they were going to take care of the people in the FBI stuff. So I told somebody, ‘I’m going to grow my hair until something happens.’”

The former Kansas State coach is referring to the ongoing bribery scandal.

The 2017–18 NCAA Division I men’s basketball corruption scandal is an ongoing corruption scandal that initially involved Adidas and several programs associated with the brand, including Arizona, Auburn, Louisville, Duke and Miami. Since then, the investigation has expanded to programs and brands beyond Adidas, including Kansas.

Weber insists that his program always did things the right way and although he is no longer the head coach, he can confidently say that he gave it his all.

“Obviously, it’s still growing. That’s the sad part of our business. Lon Kruger told me the other day, think about all the guys in the FBI thing. They are all in the NCAA Tournament except one. So I’m just proud of what I’ve done.”

The comments felt like a not-so-subtle parting shot at Bill Self and Kansas.

The Jayhawks were alleged to have committed five Level I NCAA rules violations and will participate in March Madness this year. The Wildcats, who are not implicated and ran a clean program according to Weber, will not.

As a result, Weber will no longer lead the program forward. It is unclear, however, whether he will choose to cut his hair.