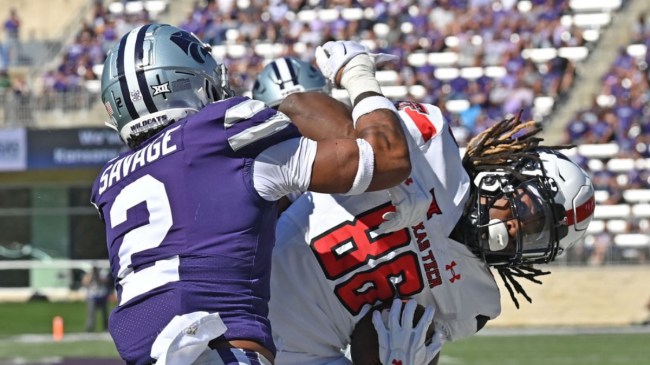 Kansas State football is on a roll right now. Last week, they went to Norman, Oklahoma and knocked off the undefeated Sooners without every trailing in the game. That win earned them a spot in college football’s top 25 this week.

To keep a hold of that spot beyond this week, they would have to get past another tough test. Today, Kansas State hosted Texas Tech with Tech coming off of an upset win of their own, beating Texas at home last weekend.

This week, Kansas State once again found themselves in control for most of the day, needing just 40 seconds to score the game’s first touchdown and getting out to a 13-0 lead in the first quarter. Tech battled back and had the game tied at 20 by the end of the 3rd quarter.

Then Kansas State once again took control, scoring 17 consecutive points in just under 8 minutes. Texas Tech would score again, cutting the lead to 37-28, but their comeback effort would stop there.

On that last scoring drive, there was an interesting moment featuring a Kansas State player.

On a play that began from a few yards outside Kansas State’s 20-yard line, Tech tried to throw down the sideline to one of their receivers, but the pass fell incomplete. K-State defensive back Kobe Savage was in coverage on the play and chose an interesting way to celebrate the incompletion. Savage blew a kiss to one of Tech’s cheerleaders.

My boy @KobeSavage shooting his shot with the Tech Cheerleader 😂😂 pic.twitter.com/BZVEbnzysl

There may never be a better time than right now for Savage to shoot his shot with an opposing cheerleader. K-State could be heading for the top 20 after this win and his 9 tackles and a forced fumble were a big part of that.