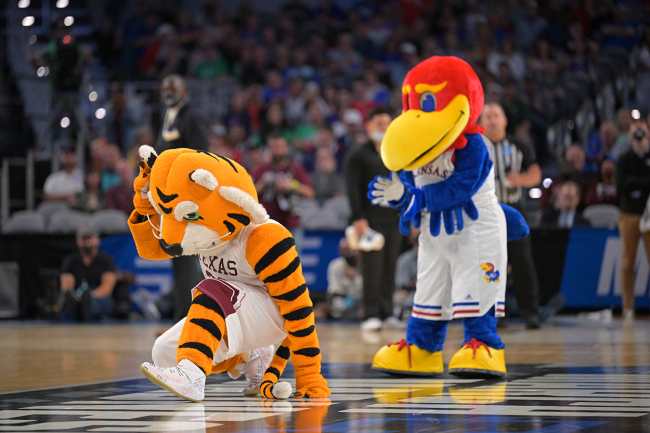 Kansas basketball put a beatdown on Texas Southern in the First Round of March Madness, but that was not the case with the mascots. The Jayhawk got absolutely demolished in a dance battle against the Tiger.

Of the 7,500 and 20,000 students, only one gets the honor of being the school mascot at any given time. It is often a very coveted position.

Well, whomever it was in the two suits on Thursday evening, they got to perform at March Madness. But it might have better if the Jayhawk had just stayed home, because he or she got smoked.

When the two mascots met at center court for a dance battle, it was a blowout. The Kansas Jayhawk went first and hit a cartwheel with a very weak whip and nae nae.

Meanwhile, the Tiger pointed at the Jayhawk as if to say “this f***ing guy.” And then it was his or her turn.

Texas Southern mascot absolutely wrecked the Kansas mascot in the dance-off. Wait for it… pic.twitter.com/eBRuoMiBVE

Kansas takes its mascot very seriously and it even has a mascot coach.

The Kansas Head Mascot Coach’s responsibilities are listed as follow:

Brian Carpenter has managed the mascot team for the University of Kansas since April of 2019, first as an assistant coach, before being elevated to the head coaching position in February of 2020. His day-to-day responsibilities include teaching the mascot team the character, walk, movements, and traditions of Big and Baby Jay. This involves practicing and lots of walking in suit! He makes sure that the team maintains full-time academic status, gets good grades and attends team workouts at 5:30 a.m., twice a week. Carpenter also handles the scheduling for the mascots at games as well as outside appearances.

It seems like Brian Carpenter should work with his mascots on their dance moves. The Jayhawk got straight-up embarrassed.