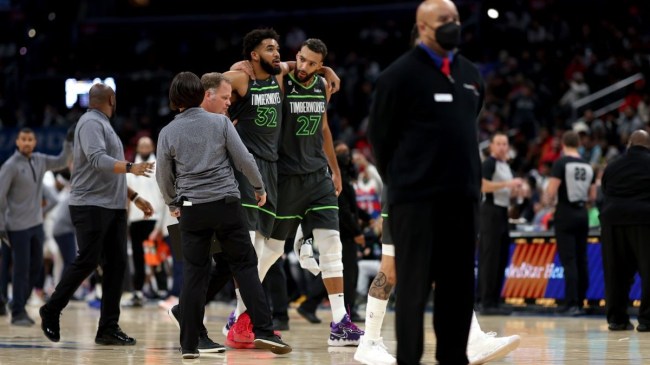 This was supposed to be the year for the Minnesota Timberwolves. The T-Wolves snapped a four-year playoff drought last season and former No. 1 overall pick Anthony Edwards started to look like the superstar they hoped he could be. Minnesota then pushed all its chips into the middle when it traded a small fortune to the Utah Jazz for three-time NBA Defensive Player of the Year Rudy Gobert.

The hope was that the move to add Gobert would give the Timberwolves the best frontcourt in the NBA with he, Edwards and Karl-Anthony Towns. But the early returns have been anything but encouraging.

Minnesota entered Monday’s game with the Washington Wizards with a 10-10 record and, coincidentally, in the 10th spot in the Western Conference. Despite adding the French superstar, the T-Wolves’ defense has been one of the worst in the league. Towns has struggled to adjust to defending on the perimeter and oftentimes he and Gobert have gotten in one another’s way. The result is a defense that allows 114.7 points per game, ranking 22nd out of 30 NBA teams.

Now it appears matters may get even worse for coach Chris Finch and his team.

Minnesota’s defensive struggles were on full display Monday against the Wizards. Kristaps Porzingis torched Gobert for 29 first-half points and Washington led 77-58 at the half.

Things only got worse from there. The T-Wolves came out of the break on a 10-0 run to cut the lead to 77-68. But late in the third quarter, Towns fell to the ground in a heap well behind the play. He immediately clutched his right calf in pain and had to be helped off the court.

KAT suffered a non-contact injury and was helped to the locker room.

The site of the injury immediately had some fans fearing the worse.

The obvious concern for this type of non-contact injury is an Achilles tear. One of the subtle signs is when KAT looks backwards. Many athletes report a feeling of being “kicked” in the leg even though it’s a non-contact injury. Hoping it’s not the case for him. #Timberwolves https://t.co/JtLTaSdzFx

The way KAT looks back to see what happened is a classic sign of a torn Achilles. Having had one myself and speaking to many who have, there’s a sensation of being kicked. Hope that’s not the case for Towns, he’s one of the best shooters in the game. https://t.co/5hN2r3lVeE

Though it appears that both he and Minnesota avoided disaster.

That’s good news for KAT. Looked concerning on the video but there are physical exam tests that the medical staff can perform immediately in the locker room that can help to rule out an Achilles tear. #Timberwolves https://t.co/gCtFIG2y1I

Towns has had a difficult time of things in recent years. Here’s hoping this is just a minor setback and that he’ll be back on the court quickly at full strength.