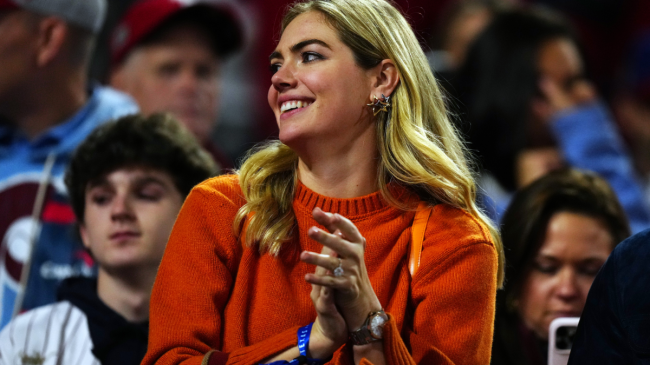 Starting pitcher Justin Verlander signed a two-year deal with the New York Mets on Monday, giving an immediate boost to the rotation in the Big Apple. Naturally, Verlander’s wife, supermodel Kate Upton, has become a topic of conversation.

Upton can often be seen rooting on her other half from the stands, and that’s likely to continue once the flamethrower arrives in Queens. Last season, the cameras often panned to her cheering on the Astros during their World Series run in October. A video from that playoff run is now going viral.

Houston faced off against the Philadelphia Phillies in the 2022 World Series in what would be a highly entertaining six-game set. The Astros wound up winning the series 4-2, and Verlander was a large part of that title victory. The 2022 AL Cy Young winner pitched a pair of contests, recording a win in Game 5.

The championship put a bow on an incredible season for Verlander, who finished the year with an 18-4 record. He chose to go out on top in Houston and will be headed to the East Coast in 2023. And for fans in New York, that means a rise in Kate Upton sightings at Citi Field next year.

Based on a video circulating social media, it looks like she’ll fit in just fine with the Mets.

While rooting on the Astros, Kate Upton was seen flipping off Phillies fans in the stands.

The video, which is from Verlander’s Game 5 win, is recirculating due to the fact that Upton will now be rooting on a Philadelphia rival in the NL East.

One person said, “Newest Fan & Wife, Kate Upton hates the Phillies as much as we do.” Another fan wrote, “Kate Upton is going to fit right in with the Mets.”

With Upton and Verlander now in New York, this may not be the last video we see of the model taunting Phillies fans.