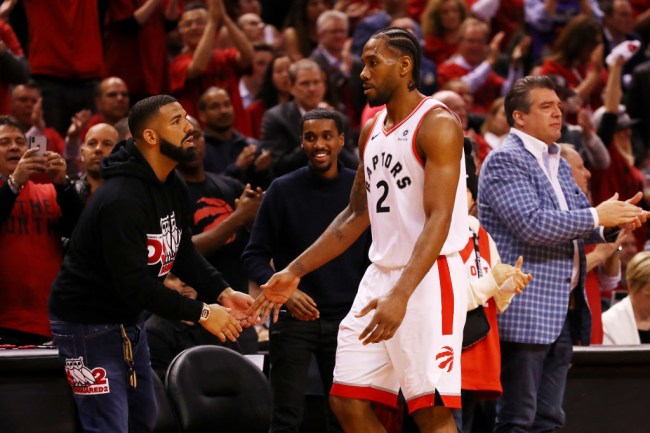 Drake has a long and storied history of putting a curse on almost every sports team he throws his support behind, and thanks to his tendency to frequently switch allegiances, an impressive number of organizations have fallen victim to his bad juju over the years.

I’m fairly sure Drake has mentioned he’s from Toronto on one or two occasions in his music, and in 2010, he asserted he was a “Raptors fan to the death” before the claim was cast into doubt three years later when he was turned away after trying to celebrate in the locker room with the Heat after they won an NBA title.

His fandom would undergo further scrutiny over the next few years thanks to his tendency to don the jersey of other teams and his decision to get tattoos honoring Kevin Durant and Steph Curry.

However, the man the Raptors tapped to be their global ambassador threw his full support behind Toronto during their postseason run last year and the franchise managed to keep his jinx at bay on the way to securing its first championship.

The Raptors wouldn’t have been able to take home the title without the help of Kawhi Leonard but saw themselves faced with the daunting task of convincing him to return when he entered free agency. Drake reportedly helped the organization hone its sales pitch and sweetened the pot by offering him a role at his record label but his efforts weren’t enough to prevent Leonard from signing with the Clippers.

Leonard had weighed his options but decided Los Angeles was the ideal fit after the team agreed to orchestrate a trade that would allow him to play alongside Paul George, which was the end result of a master plan that was orchestrated with a little bit of help from none other than Drake himself.

Paul George called to congratulate Kawhi Leonard on winning a championship and then “it took on a life of its own.” After countless text messages, phone calls and two meetings at Drake’s house 👀, they were both home in LA. Here’s why that meant so much to George. pic.twitter.com/7Hr6weE89r

According to ESPN, Leonard took Drake up on his offer to crash at his pad outside of Los Angeles while he was examining his options and decided there was no better location to hold meetings with George as he plotted his exit from Toronto:

There were countless text messages and phone calls and then two in-person meetings at Drake’s house in Hidden Hills, California. (Drake had befriended Leonard during his season in Toronto and let Leonard — who lives in San Diego — stay there when he was in Los Angeles for free-agent meetings).

By July 1, they had decided to put their plan in motion: Leonard told the Clippers that he was interested in playing for them but only if they could improve their roster by adding an All-Star-caliber player like George.

Drake, if you’re reading this, you should know that you’re going to want to resist the temptation to immediately pull the knife out of your back and instead seek the aid of trained medical professionals, as the pressure of the blade is actually helping to minimize the bleeding.

I wish you the best of luck in your recovery.