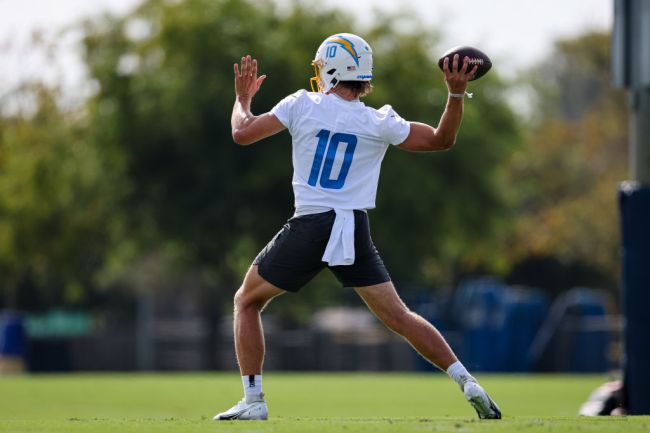 The Los Angeles Chargers have been pretty fortunate at the quarterback position ever since they moved past the mistake of drafting Ryan Leaf. After Leaf, they turned the ball over to Doug Flutie. Then Drew Brees took over for a little while before leaving for New Orleans. Then they made that trade with the Giants that saw them end up with Philip Rivers.

Now they have Justin Herbert, who has had a very impressive first couple of seasons in the NFL and is widely expected to be one of the league’s best quarterbacks this year.

Today, star Chargers wide receiver Keenan Allen was speaking to the media when he revealed a factor that may be a pretty big contributor to Herbert’s success and it’s something that differentiates him from Philip Rivers.

According to Allen, Herbert stays after practice for “like an hour and a half” just to throw balls, which is something he says Rivers never did.

Keenan Allen on Justin Herbert: "You see him. He stays like an hour and a half after practice just throwing balls. It's crazy."

When asked why he laughed, Allen said with a smile: "Philip never stayed after practice to throw the ball."

It’s understandable that Rivers wouldn’t have much time to stay after practice to throw when he had 9 kids waiting at home for him.

If Herbert continues to progress the way he did in his 2nd year in the league, he could be back in that conversation again this season.