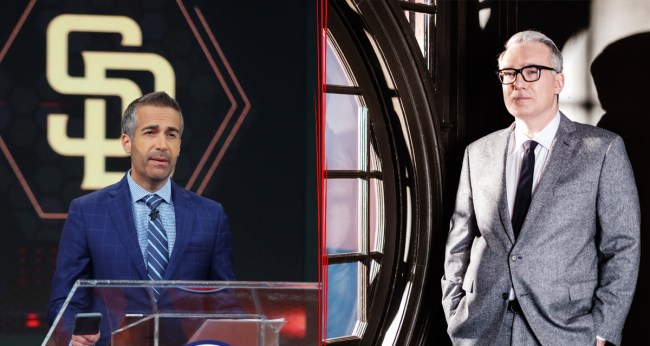 Keith Olbermann calling anyone the “worst d–khead” in any area is about as ironic as it can get, but here we are. During ESPN’s Sunday Night Baseball, Olbermann took to Twitter to rip his former colleague at ESPN, Matt Vasgersian.

Vasgersian, who was broadcasting the game between the Chicago White Sox and Chicago Cubs with another beacon of sincerity, Alex Rodriguez, told a story about Jon Sciambi, the play-by-play announcer for the Chicago Cubs TV broadcasts.

Apparently, that was the straw that broke the proverbial camel’s back for legendary curmudgeon Keith Olbermann.

OK for the entirety of my 2018-21 tenure @espn I stayed silent about this but Matt Vasgersian is the worst dickhead in baseball.

Here he tells an anecdote @BoogSciambi gacw to him, then when they show Sciambi on camera, Vasgersian insults him and diminishes his work: pic.twitter.com/2d4mAXiMm6

Olbermann wasn’t done after calling Matt Vasgersian the “worst d–khead in baseball.” Not by a long shot.

He then tweeted, “This is not the first rime Vasgersian has trashed an @espn colleague – this year. Anchoring one of @MLBNetwork’s many deplorable studio shows in spring training, Vasgersian followed @jasonbenetti’s sign off of a White Sox broadcast by insulting Benetti’s last words.”

Then the man who Philadelphia magazine once asked about in the headline “Keith Olbermann: Worst Person in the World?” had one final parting shot at Vasgersian, tweeting, “It is an accomplishment of biblical proportions to share a booth with @AROD and make HIM look like the reasonable, well-liked, talented one. But Vasgersian has managed to do it. The capper is: he’s also one of the worst pxp in the sport. He mocks others because they are better.”

If you’re just here for the comments in response to Keith Olbermann calling Matt Vasgersian (or anyone, for that matter) a “d–khead,” here you go…

It’s almost like they are joking and friends. It’s probably been a while since you have had one of those.

Sounds like you’re bitter at no longer being in the “club”, Keith. You’ve become a pariah in the industry and someone we have all come to recognize as unhinged. You’re realizing you’re no longer relevant in the sports or political world and you’re panicking. Get some help

And airing this stuff is why, wherever you go, you always end up gone. There is not a more detestable human being in media, or anywhere, than you. A filthy, malignant person...

Keith, you are such a sad pathetic person. You dont touch Matty V as a person or his career. You are an embarrassment to all men and sports fans @dar_br123 @mrevanmeyer @Jerry_Machado69 @jonadamfinney

Oh my god,, shut the F up ,, no one cares what you say get over yourself

Absolutely impossible. Pretty clear you are the biggest d@#head in whatever sport you are speaking about from your soapbox which I can only assume is made of dead non liberal babies. Please just go away.