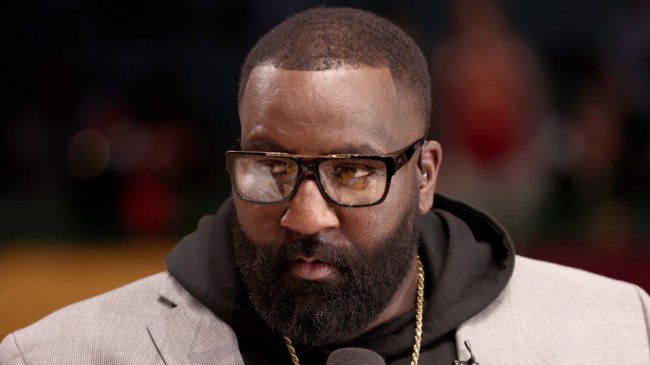 Kendrick Perkins had a rough day at the office today.

He couldn’t have been expecting to get absolutely wrecked while making an appearance on NBA Today alongside Vince Carter, Richard Jefferson, and Malika Andrews, but Andrews was ready to absolutely destroy him with a joke about his career compared to the two former NBA stars.

During the segment, Andrews pointed out that the three players had combined for 219 30-point games during their NBA careers. Carter had 185. Jefferson had 34. Andrews was quick to make the point that this meant that Perkins had contributed none.

Vince Carter has 185 30-point games, Richard Jefferson has 34, and Perk has 0.pic.twitter.com/fgk0fCMTj2

Perkins did get close to contributing to this stat once in his career. That effort came in a 26 point performance against the Milwaukee Bucks back in 2009.

Meanwhile, the other two men on the panel were much more successful scorers during their time in the NBA. Richard Jefferson averaged 12.6 points per game in the NBA and had 2 separate seasons with the Nets where he averaged more than 20.

Vince Carter averaged 16.7 points per game during his career and spent much of his career averaging more than 20. He is also 20th all-time in career scoring.

Perkins took the dig like a champ and laughed it off, but it was still a brutal shot from Andrews about a lack of scoring from Perk throughout his NBA career.