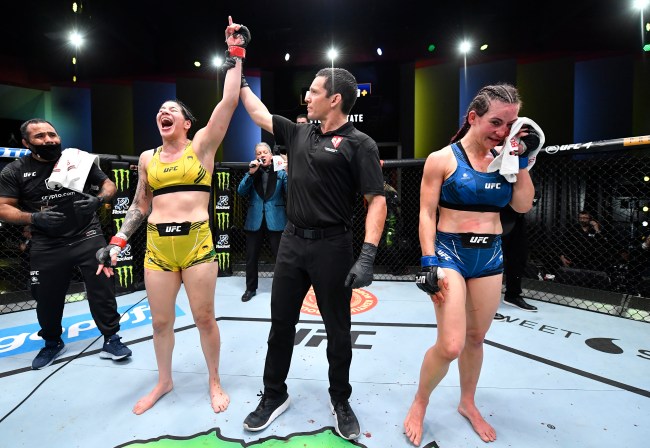 A very slow night of fights came to an exciting conclusion when Ketlen Vieira took a unanimous decision over former champion Miesha Tate. This was a fight that was up for grabs right until the end.

The UFC Fight Night: Vieira vs Tate main event was a gritty striking battle for the full 5 rounds where both women struggled to really pull away from their opponent. Heading into the 5th, the internet’s scorecards were all over the place, ranging from 3-1 Tate to 3-1 Vieira. We would go on to find out that two judges had it 2-2 and one had Vieira up 3-1 going into the 5th.

In that final round, Vieira took over, stinging Tate repeatedly and even closed Tate’s eye with her strikes. It ended up being enough for Vieira as the scorecards came back 48-47, 48-47, and 49-46 to give her the decision win over of a legend of the women’s fight game.

The loss for Miesha Tate puts a stop to the momentum she had built after returning from retirement. Her last fight saw her dominate Marion Reneau en route to a 3rd round tko win.but now she’ll likely find herself fighting to keep a spot in the top 10 the UFC rankings.

Ketlen Vieira’s win puts her in an interesting spot for right now. She is currently ranked 7th in the UFC women’s bantamweight division, but has lost to two of the women ahead of her (and one of them is pregnant). One of the women ahead of her is moving up in weight. Juliana Pena is fighting Amanda Nunes next and Holly Holm probably wouldn’t be interested in a fight with Vieira.

This likely leaves her with Germaine De Randamie as a potential opponent or she’ll need to take on another opponent ranked below her to stay active while the division sorts itself out.

Regardless of what her next move may be, Ketlen Vieira earned herself a lot of recognition for going out and winning a tough fight against a fan-favorite and that bodes well for a career that she is still only 14 fights into.