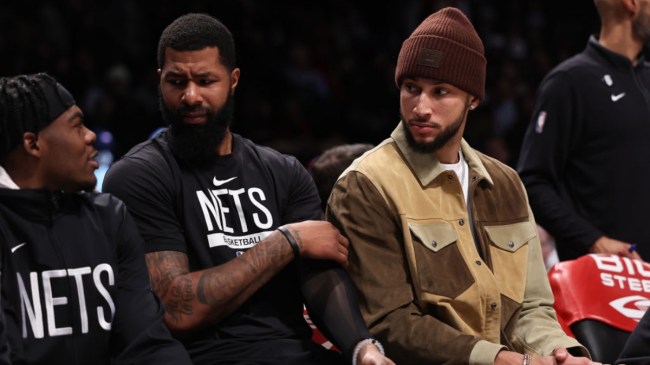 There isn’t much going right for the Brooklyn Nets right now. Even with Kevin Durant averaging 32 points per game, the team has struggled to win games.

The team currently has a 3-6 record and their season doesn’t look likely to get better any time soon as they deal with Kyrie Irving’s off-court issues.

It’s a continuation of the team’s struggles at the end of last season, where they weren’t particularly competitive as the Boston Celtics swept them out of the playoffs.

At the time, there were some fans holding out hope that help was on the way for the franchise. That help was supposed to be Ben Simmons, who didn’t appear in an NBA game last season. Unfortunately, he hasn’t changed anything for the Nets.

Despite playing plenty of minutes, Ben Simmons has yet to score 10 points in a game and he continues to look afraid to shoot the ball. He is also still badly struggling at the free throw line.

Meanwhile, he hasn’t had the impact the Nets were hoping for on the defensive end of the floor as the team still has not been particularly good on defense this season. To make matters worse, he hasn’t been available for the team’s last 3 games.

Now it appears that playing with Simmons is starting to take its toll on the Nets. According to ESPN’s Adrian Wojnarowski, Kevin Durant and other Nets players have become frustrated with Ben Simmons.

"Ben Simmons has been a source of frustration for Kevin Durant, for others on the Nets so far, because he's been unable to stay on the floor, but prior to that, he has shown that he's a long way away from being back to an impactful player."

Every day, the situation in Brooklyn just seems to get worse and worse. Even with the Nets winning 2 of their last 3, it’s becoming more and more clear that they need to give up on this version of the team becoming a contender and start dealing whatever attractive pieces they have to get themselves some draft picks back.

Right now, it’s hard to see any other way to fix what has quickly become the NBA’s biggest mess.