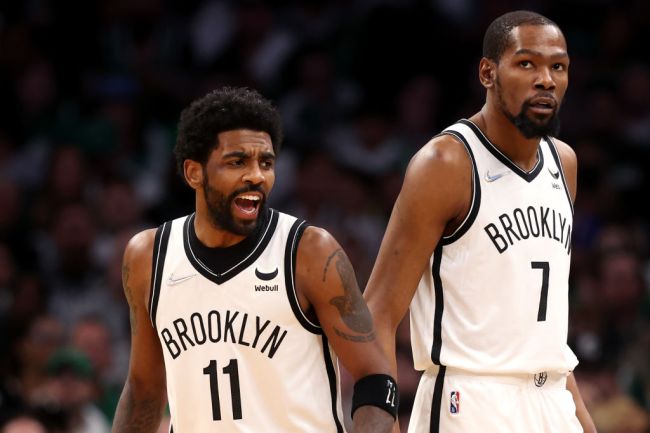 The Brooklyn Nets and Boston Celtics are currently taking part in the most anticipated series in the first round of the NBA playoffs. However, it took only one game of that series for some of the focus to turn to Kyrie Irving’s relationship with Celtics fans.

Kyrie previously spent two seasons in Boston, but those seasons didn’t quite live up to expectations and it would appear their fans still harbor some resentment over it.

Game 1 saw those fans heckling Kyrie to the point that he decided to return fire, snapping back at one fan and flipping off the crowd during the game.

Kyrie was fined $50000 for his actions today. Today we also got to hear his fellow Nets star, Kevin Durant, give his take on the situation.

KD on stars getting booed in returns to former cities: "Its rooted in love. They once loved you, cheered for you & bought your merchandise, had life altering experiences coming to games watching you play. When it gets ripped from them…they feel like a piece of them is gone too”

While Durant’s idea here makes a lot of sense, it’s hard to see how it applies to Kyrie and the Celtics. Kyrie only spent 2 years in Boston and never brought the Celtics the success they were looking for. It’s hard to believe fans would have established much of a connection with him during that time.

Beyond that, they have since found a replacement star in Jayson Tatum who has been with the team for his whole career and will spend a lot more time in Boston than Kyrie ever did.

Durant’s take seems much more applicable to his own career. He was beloved by fans in Oklahoma City as the man who took the city’s new franchise to the NBA Finals. Even in Golden State he won a ring. Still, he hasn’t experienced the same animosity from his past teams that Kyrie has.

Whatever the reasons for the vitriol from Celtics fans, we can probably expect to see some more exchanges between them and Kyrie before the end of this series.