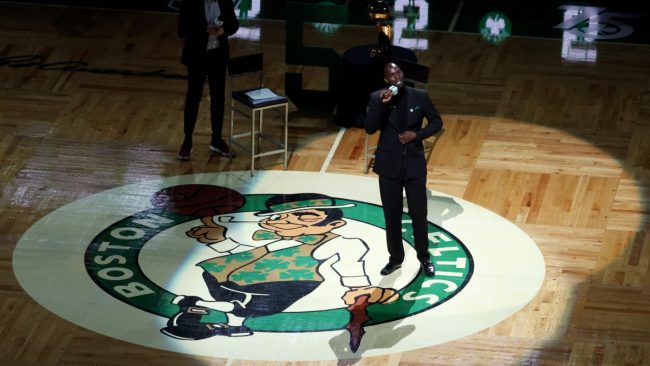 The NBA Finals are underway with the Celtics nabbing a surprising victory on the road in Game 1. With the Warriors leading by double digits in the fourth quarter, Boston stormed back to land a 12-point come-from-behind win.

The win gives the Celts an early 1-0 advantage with a huge Game 2 looming.

Former Boston star Kevin Garnett was asked about his thoughts on the series moving forward, and his response shouldn’t surprise anyone.

“I like the C’s. That three-headed monster of Jayson Tatum, Jaylen Brown, and Marcus Smart has to continue. The Warriors have that championship DNA, and then we got these hungry young C’s so it should be a great battle. I got the Celtics to win this series. I think it’s going to be six games.”

That’s the least surprising pick considering Garnett won a championship in Boston back in his playing days. In fact, that’s the last time the franchise has won a title.

They find themselves in a position to end that streak this year, and they’re already off to a great start.

Garnett also gave a pick for the Finals MVP, but this one is a bit more shocking. He’s going with longshot Al Horford to take home the honor while helping lead the Celtics to a championship.

Horford entered with 100/1 odds prior to the series’ start, but an impressive Game 1 performance has led to a huge jump in his MVP chances.

Should Horford continue to play at the level he did in the opener, Boston’s title odds will continue to rise, too. And Kevin Garnett will be happy to know that his predictions came true.