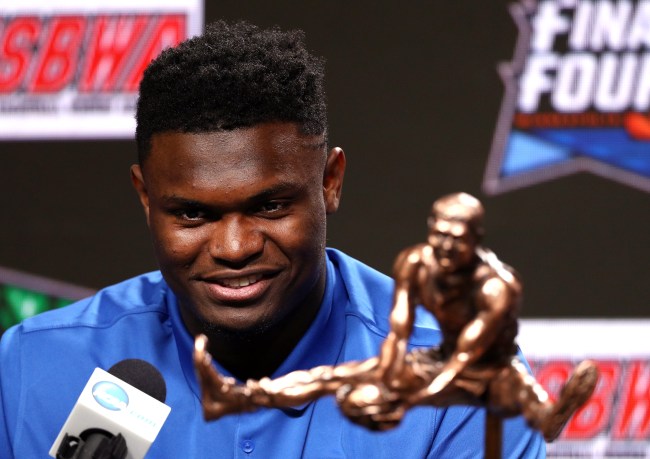 Kevin O’Leary is a serial entrepreneur whose net worth is estimated at somewhere around $400 million. Kevin O’Leary‘s best known for being one of the ‘sharks’ on Shark Tank, but the dual Canadian and Irish citizen has made a fortune as a venture capital investor.

He was the Chairman and lead investor of O’Leary Funds of which his brother is the Director. They managed upwards of $1.2 billion until they sold the O’Leary Funds back in 2014. Kevin has business interests in Books, Media, as well as Investing.

TMZ Sports caught Kevin O’Leary on the street outside of the Nasdaq HQ and asked him to offer up some advice to Zion Williamson. The 2019 NBA Draft will be held later this month on Thursday, June 20th after the NBA Finals conclude. Kevin’s advice is pretty generic but it’s definitely extremely relevant for athletes who have the highest ceilings, and it’s a not-so-subtle shot at teams from smaller markets.

Zion is expected to be the #1 overall draft pick and be selected by New Orleans. He’ll instantly become the face of their franchise, sign a lucrative contract, and his life will never be the same again. Here’s Kevin O’Leary’s advice for him:

Am I crazy for thinking that the TMZ paparazzi who stopped Kevin on the street really isn’t a sports guy? It took him a lot to get this question out. Maybe he was caught off guard or out of breath. He also tried to talk over Kevin throughout this interview with multiple ‘okays’ which was just odd. But here’s Kevin’s answer, in case you’d rather read:

Kevin: “I always say…It’s painful for the teams in small markets. Get drafted by a team with a big demographic. Because endorsement deals end up being more than your revenue from what you’re being paid. So you want to be in those (big) markets. You know, think about it…LA, New York. LA, New York, LA New York.”

TMZ: “What should he invest in?”

Kevin: “Start by getting an advisor because most of these guys blow their brains out so quickly, and then over time build a real estate portfolio, some really boring bonds, and some large paying stocks, and don’t have an entourage.

Look, walk around with two people, not twenty. Most of the money goes to people you forget after a while but you spent it building an entourage. Big mistake.

You do need an advisor, sometimes a good parent will help you. But your agent now, these agents have figured out that their clients are losing all their money and it’s bad for their business. It’s better to stay away from this entourage, this idea that you have to support everybody around you. Support your mother, not all of your friends.”

TMZ: Should he buy certain kinds of suits out of college? How do you look professional?

Kevin: Look, I always tell everybody that you want a little fashion sense. If you’re a basketball player you want a sharp suit. Take it from Mr. Wonderful, you want a great watch. I always say if you wear an Apple Watch you’re 20% off retail when you start/before you said anything. You want to really start to show a little design flair and that gives you market value to people that want to advertise with you.”

He’s not wrong. If you’re a high-profile athlete you need to figure out how to somehow raise your public profile to catch the attention of advertisers. If that means dressing flashy then that’s fine, that’s still cheaper than trying to support an entourage of 10 friends from high school.

It does seem a little strange how much he harps on not supporting an entourage because that isn’t really the problem it was a decade ago or a decade before that. Zion’s been at Duke. It’s not like he dragged his entourage to college with him. He’s surrounded by the best marketing team on the planet by now and has a superagent. The investment advice is pretty practical. Invest in real estate. It’s something we should all do.