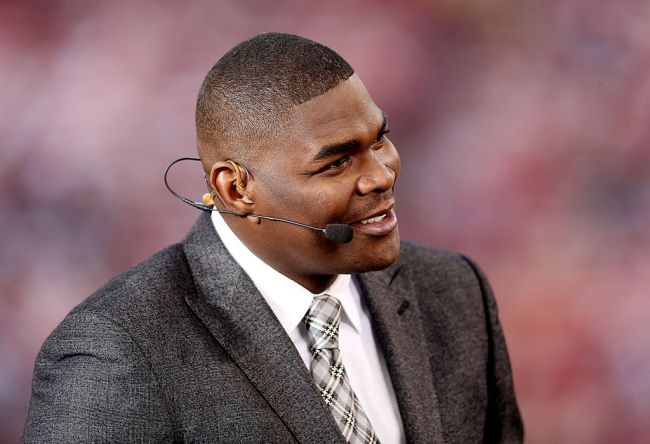 During Wednesday’s edition of ‘First Take’ on ESPN, Keyshawn Johnson played co-host alongside Stephen A. Smith. For some reason, the producers of the show thought that a debate about which position in football has the biggest divas was a good idea.

Debating about divas in a position group 24 hours from the start of the NFL season seems strange, but ESPN has to fill the show with something.

To no surprise at all, Johnson, a former NFL wideout himself, piled on the quarterback position essentially saying QB’s can do no wrong as they’re the most important, and highest-paid players on the roster.

“The moment that we (wide receivers) look like we’re frustrated or we have a certain swag to us, we’re divas,” Johnson said on ‘First Take.’ “But quarterbacks can ask for the highest money, they can decide whether or not. Aaron Rodgers can decide if one day he wants to play. I might need to have some control or else I’m going to do Jeopardy!. If a receiver did that, we would be crucified.”

Johnson wasn’t finished there, not only did he take a bit of a jab at Aaron Rodgers, but he called out his own former quarterback in Dallas, Tony Romo, for being a diva.

"Tony Romo is one of the most diva-ish dudes that I've ever been around at [QB]. … And he wasn't even starting at the time."

“I played with Tony Romo on the Dallas Cowboys,” Johnson explained. “Tony Romo is one of the most diva-ish dudes that I’ve ever been around at that position, and he wasn’t even starting at the time.”

Talk about a comment out of nowhere. The debate at hand is already mind-numbing enough, so I supposed Johnson was just looking to add a bit of spice into the conversation. Well, mission accomplished, sir.

Romo seems like a pretty down-to-earth guy when calling games from the broadcast booth, but maybe he is a diva behind closed doors.