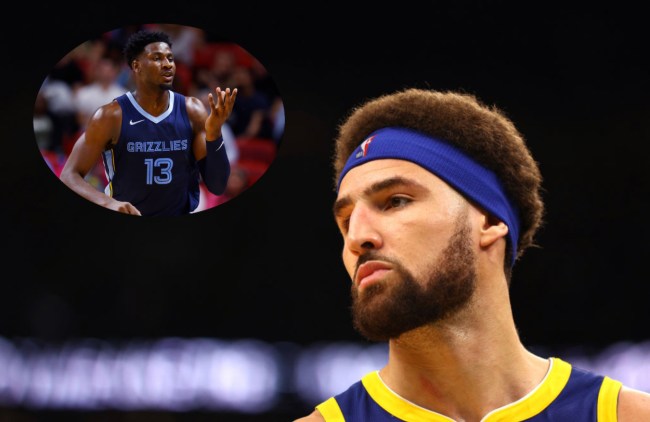 The Golden State Warriors and their big three of Steph Curry, Draymond Green, and Klay Thompson won their fourth title in eight years on Thursday night beating the Boston Celtics in six games. For some reason, Thompson had the Memphis Grizzlies on his mind.

During his post-game press conference, less than an hour after he and the Warriors cemented their dynasty, Thompson brought up a tweet from Jackson Jr. from March 28.

Jackson Jr. tweeted “strength in numbers” after Memphis throttled Golden State that night. Memphis was without both Ja Morant and Jackson Jr. in that game while Steph Curry and Thompson both missed the contest as well.

Jackson Jr. was simply hyping up his guys after a regular-season win, but Thompson took the tweet personally. The tweet makes Jackson Jr. a “clown” and a “bum,” according to Thompson.

“There was this one player on the Grizzlies that tweeted ‘strength in numbers’ after beating us in the regular season and it pissed me off so much,” Thompson said.

“I can’t wait to retweet that thing, freakin’ bum, I had to watch that, freakin’ clown. Sorry, that memory just popped in my head, you’re gonna mock us? You ain’t ever been there before. We’ve been there, we know what it takes, so to be here again, hold that!”

Talk about a weird, pointless tweet to just ‘pop in your head’ shortly after winning a title. Certain players are motivated by different things, but if this isn’t a perfect example of a player living rent-free in another’s head, I’m not sure what is.

If you’re Jackson Jr. and the Grizzlies you have to take Thompson’s bizarre shoutout as a compliment. Sure, the Warriors beat the Grizzlies in the Western Conference Semifinal this year, but that Memphis squad was the youngest to reach a conference final in the past 25 years.

A young Grizzlies team isn’t going anywhere while the Warriors aren’t getting any younger.