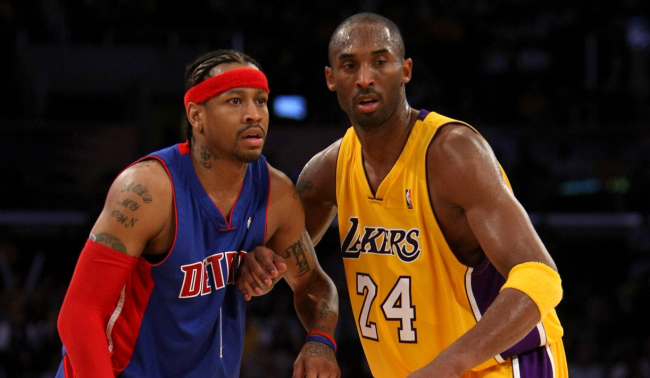 In 2007, after winning three NBA championships with the Lakers, Kobe Bryant was unhappy with the direction Los Angeles was moving. The team had only been to the NBA Finals once since completing their three-peat at the end of the 2001-2002 season and were a barely above .500 team.

So, a deal was struck between the Lakers and Detroit that would have seen Kobe traded to the Pistons for Richard Hamilton, Tayshaun Prince, Amir Johnson, and a first-round pick.

It ended up not happening and Bryant went on to win two more NBA Championships – in 2009 and 2010 – with Los Angeles, cementing his legacy as one of the greatest Lakers of all time.

On Friday, Hall of Famer Joe Dumars, who was the president of basketball operations for the Pistons from 2000 to 2014, shared the story of how this historic deal almost happened, and why it didn’t, with The Crossover podcast.

“It was myself and Mitch Kupchak, current GM was obviously involved [Rob Pelinka] ’cause he represented Kobe at the time, Bill Davidson, the Pistons’ owner, and Jerry Buss,” Dumars told host Howard Beck. “Those were the people that knew the deal. Mitch Kupchak and I went back and forth about parameters. This is when Kobe was saying, ‘I want out, Lakers aren’t trying to win, I want out.’ It was two teams that Mitch felt like had enough pieces to do a deal for Kobe. It was us and Chicago. Mitch called and said, ‘look, I’d like to work out something with you’, take us a couple days to work it out, and then we agreed on the deal.”

Everything was in place. The only thing left to finish the deal was getting Kobe Bryant’s seal of approval since he had a no-trade clause in his contract.

“At that moment you’re going, ‘Okay, this could happen!’ You’re not popping champagne,” Dumars admitted. “You’re silent about it, you’re not talking with anyone about this. This is under wraps and you’re waiting for things to play out.”

Dumars says the deal was so close to being done that Lakers owner Dr. Jerry Buss told Pistons owner Bill Davidson over the phone, “We have a deal. Only thing, Kobe’s gotta approve it.”

Kobe would have created another dynasty in Detroit https://t.co/8eEgSdAqog

“They took it to Kobe, and Mitch told me that Kobe said, ‘I need 48 hours or something to discuss this with my family.’ Dr. Buss was like, ‘no. We need an answer in the next day or whatever.’ And Kobe didn’t want to be forced into making a decision that quick,” Dumars recounted.

Following a mediocre 2006-2007 season in which the Lakers went 42-40 and lost in Western Conference First Round, Los Angeles jumped to 57-25, winning the Pacific Division and making it all the way to the NBA Finals – losing to Boston 4-2.

One year later, the Lakers were NBA champions once again. Then they repeated the following year and the rest is history.