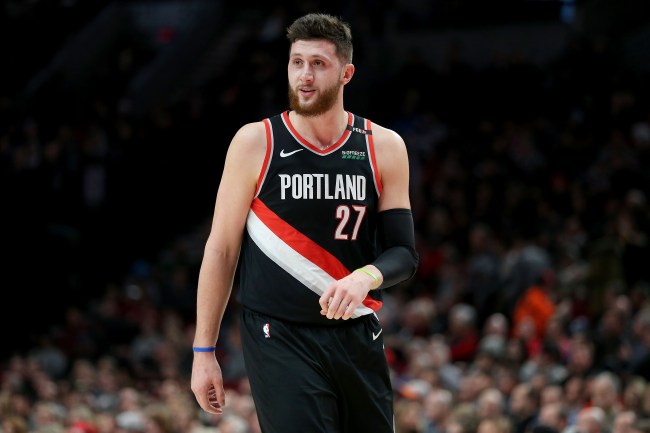 Kobe Bryant was, is and will forever be one of the biggest competitors the NBA has ever seen. From the legendary stories of him going at teammates in practice to him chirping with opposing players on the court, The Mamba’s trash-talking ability was one of his greatest strengths — and weapons.

As it turns out, Bryant didn’t just get into the heads of opponents by talking trash in English, because Portland Trailblazers’ big man Jusuf Nurkic — who’s from Bosnia — went on SportsCenter after his team’s game against the L.A. Clippers last night and detailed a pretty awesome story about how Kobe Bryant talked sh*t in Bosnian. My goodness, Bryant was a damn savage out there.

Here’s the story that Nurkic described to anchor Neil Everett, per UPROXX:

“A funny story was, he’s shooting the free throws, Kobe, and I’m out there like, ‘Nobody even can touch him, how is that possible,’ all night he was in free throws,” Nurkic said. “He actually says a word in my language and I was like, ‘I didn’t hear right, he can’t speak my language, right?’ So we go back and forth, and he goes again to free throws and he repeats that. It was curse word, but it’s like … I’m pretty sure he said that. Then I was, you know, after a couple years in the league, he was, like, preparing himself when he plays against some teams, he will try to learn a little bit about every player he’ll play.”

Jusuf Nurkic just basically described how obsessed Kobe Bryant was with dominating other players. I mean, c’mon, the dude actually learned Bosnian so that he could trash-talk the now 24-year-old big man. Seriously, who the hell even thinks about doing that?

Bryant, who, like so many others, served as Nurkic’s favorite NBA player while growing up, so this had to be a pretty cool experience for him when it happened — even if it was meant to get into his head. Kobe was just on an entirely different level than other all-time greats, and this story proves it.

The entire SportsCenter interview between Jusuf Nurkic and Neil Everett is pretty entertaining, to say the least. They play some ping pong and just sort of toss around banter as if they’re good ol’ friends. You can watch the entire clip below — which I definitely recommend doing.

Giving some other memories of Kobe Bryant, it’s clear that Jusuf Nurkic absolutely admired the guy. So this is good stuff all around.