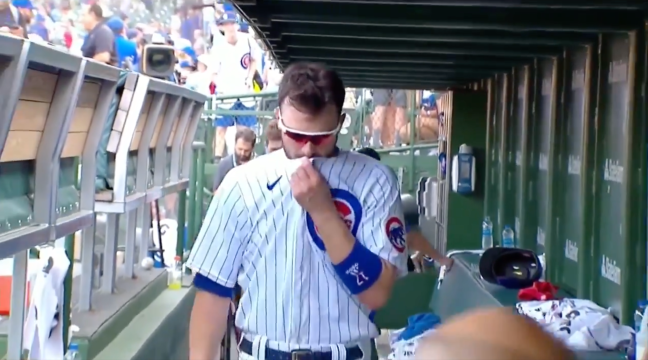 Kris Bryant has played the first five and a half years of his Major League Baseball career with the Chicago Cubs. That is more than likely about to change in the next 24 hours as the 4:00 p.m. EST trade deadline approaches on July 30.

There is no clear front-runner for which team might be most interested in acquiring the 29-year-old, but he has been linked to the Rays, Yankees, Giants and Mets, among others. Pretty much every team in the league would love to have him and it’s just a matter of who, not when.

Bryant’s teammate and best friend Anthony Rizzo was shipped off to the Yankees on Thursday and the former is not far behind.

One final ride at Wrigley.

Despite the inevitable, and much to the fanbase and baseball fans’ displeasure, neither player was in the lineup on Thursday as Chicago hosted Cincinnati at Wrigley Field. It is common for teams to sit players that are destined to be traded prior to the deadline to ensure their health.

Manager David Ross said that the day off was related to rest and scheduled in advance. Whether true or not, it was disappointing, even for a very sad Bryant.

In the bottom of the ninth inning of the Cubs loss, the fans started chanting to bring both players in for one last curtain call.

“We Want Bryzzo” chant broke out at Wrigley in the 9th. #Cubs

The encore never came and, after the game, Bryant was visibly moved to tears as he took in the most historic stadium in baseball one last time.

He was not the only one to soak up the moment. The Rizzo family shared one last walk around Wrigley— even their dog.

A better look at the Rizzos at Wrigley. pic.twitter.com/8rwabfjzpV

‘Bryzzo’ was a big part of Chicago’s historic World Series championship in 2016. They have played together since the start and Bryant was honest in that he hoped it could last forever.

“As much as we would all love to play together and be with each other the rest of our careers, cause it’s kind of all we’ve known, you know, sometimes it doesn’t happen that way.” 😭

The narrative surrounding Bryant’s eventual move has been difficult. He admitted that it will be difficult to leave.

I’m so sorry everything has happened this way Kris, you deserve so much better. 😔