Colorado Signed Kris Bryant To A Huge Deal After Letting Nolan Arenado, Trevor Story Walk And Fans Are So Confused 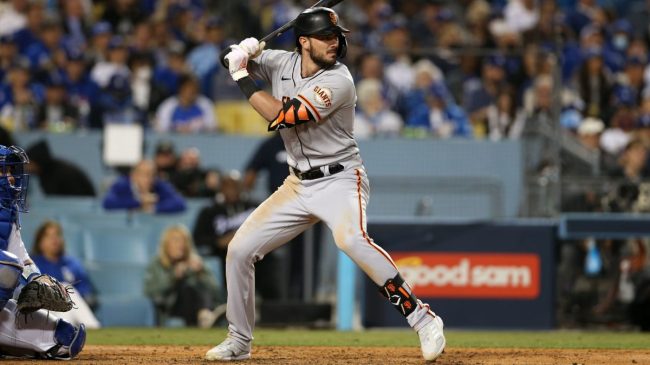 Kris Bryant is on the move.

After just one season with the Giants, the former National League MVP is leaving the West Coast. He won’t be going too far, though.

Bryant is staying put in the NL West division after signing a massive deal with the Colorado Rockies. The deal is reportedly worth an absurd $182 million spread out over a seven-year contract.

Bryant has All-Star potential, and the thin air of Coors Field could help increase his power numbers even more.

The corner infielder has smacked at least 25 long balls in five of his seven professional seasons. He won Rookie of the Year honors in 2015 then followed it up with an MVP season in 2016.

Still, the price tag seems a bit high, especially considering the fact that the Rockies just let two superstars walk due to their hefty asking prices.

Rockies Fans Are Confused About The Kris Bryant Signing

Some Rockies fans were questioning the move with the team passing up major deals for Nolan Arenado and Trevor Story, only to dish out over $180 million to Bryant.

The Rockies refused to pay Trevor Story, traded away Nolan Arenado, and then they…give Kris Bryant $180 million over 7 years…?

Confused by the Kris Bryant deal. Happy he got paid, but confused at why they wouldn’t even attempt to keep Trevor Story, and literally pay the Cardinals to take Nolan Arenado.

*trades Nolan Arenado
"OMG! The Rockies are so cheap! Sell the team!"

13 months ago, the Colorado Rockies traded Nolan Arenado to get out of paying the remaining $199 million on his contract.

Now they signed Kris Bryant to a deal that is only $17 million less than that. Explain how this makes sense.

So you trade Arenado, and let Story walk just so you can sign 30 year old Kris Bryant…why? Seriously why

As pointed out by @Andy_Lindahl just now, hooray for Kris Bryant… but for $182 million plus $50 million you shipped to St Louis, the Rox could have just kept a better third baseman

The Rockies make no sense. They got rid of Arenado, a homegrown superstar and then gave him to St. Louis for nothing. Now, they sign Kris Bryant to a huge deal. An organization with zero direction.

We’ll see if the slugger can buck the naysayers in 2021. Fans will get their first look at Bryant in a Rockies uniform in just a few short weeks. Opening Day is set to kick off on April 7th.