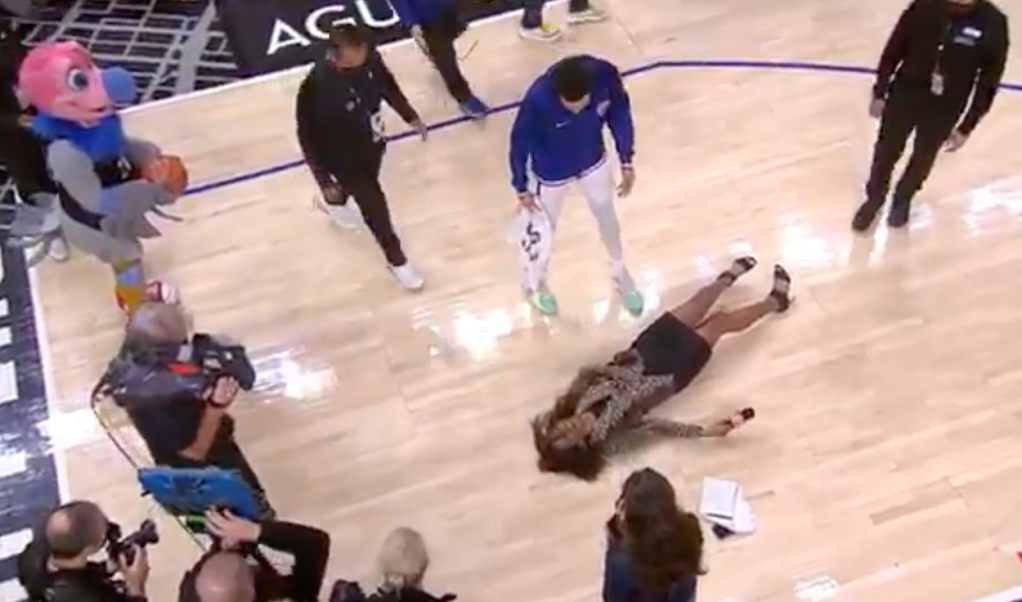 Kristina Pink is a Fox Sports reporter who just began a new chapter in her career this week as a sideline reporter for the Los Angeles Clippers. After Sunday’s 106-93 win over the Atlanta Hawks, Pink was interviewing Clippers shooting guard Amir Coffey on the court. There was water in the area, one thing led to another, and she fell and smacked the court so hard it hurts to watch.

Amir Coffey had a heck of a game. He went off for 21 points (led all players), 5 rebounds, and 3 assist. As you can see from the footage below, the interview went great and everything was awesome right up until the moment she slipped on the water.

I actually thought twice about posting this. Kristina Pink is a professional and a well-qualified sideline reporter. I didn’t want to be one of those people piling on after an embarrassing moment. Alas, she went to the University of Florida and I went to Florida State University so sharing this clip feels like fair game (I’m joking, it’s just a blooper, don’t take it so seriously).

She later tweeted about the incident:

For everyone asking, I’m ok ❤️ There was water on the court… Appreciate all the messages.

The Twitterati world of reactions picked up fast. Her fall was brutal. Everyone has thoughts on it. There were some memes, some GIFs, and lots of jokes flying around.

He understood the assignment pic.twitter.com/ljiagPw2Jk

Let’s all agree @Kristina_Pink took it like a champ. She never dropped that mic either. That’s dedication to the job.

She truly handled it better than I ever would’ve been able to. If that was me I probably would’ve found a way to dislocate my shoulder and tear some sort of ligament on the way down but she didn’t even drop the mic and handled it like a champ!