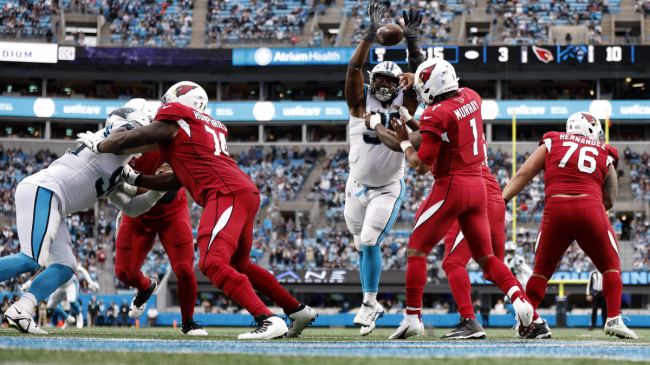 The Carolina Panthers and Arizona Cardinals are playing in a snoozer in Charlotte Sunday afternoon. The two teams were tied at 10 before the Cardinals exploded for 16 points in the fourth quarter.

The quarterbacks for each of those teams happen to be former first-round draft picks out of Oklahoma. Both won the Heisman trophy with the Sooners before heading to the NFL.

But they look far from that status in their most recent matchups.

Both posted identical 90-yard first halves, throwing for a pick each and no touchdowns. The Panthers led at halftime, 10-3, thanks to a pick six.

Things got much better in the second half for the Cardinals, in part because of a Baker Mayfield interception, his second on the day. With that being said, neither offense has done much of anything on the afternoon, combining for less than 560 yards in the game.

The lack of consistent production has folks on social media talking.

Fans are now saying that Baker Mayfield and Kyler Murray are having a mid-off in Carolina following slow starts. Take a look at the immediate reaction online.

Baker Mayfield and Kyler Murray having a mid-off, I see!

Kyler and baker having a mid off

Are Kyler and Baker the same person??

Kyler and Baker battling it out to see who’s the the worst OU qb. It’s closer than you think today. 🤷🏾‍♂️🤷🏾‍♂️

Many noted the dismal first half performances of each passer. One fan wrote, “Both Kyler Murray and Baker Mayfield had exactly 90 pass yards and a pick at halftime.”

Both Kyler Murray and Baker Mayfield had exactly 90 pass yds with a pick at halftime.

This tweet pretty much sums up the thoughts of viewers everywhere. “Baker vs Kyler is the worst matchup of former Heisman winners & No. 1 overall picks from the same school I’ve ever seen.”

Baker vs Kyler is the worst matchup of former Heisman winners & No. 1 overall picks from the same school I’ve ever seen.

Mayfield is hoping to prove his doubters wrong after his dramatic departure from Cleveland. Murray is looking to produce after signing a huge contract extension in Arizona.

Both will need to play better than this in order to prove their worth.