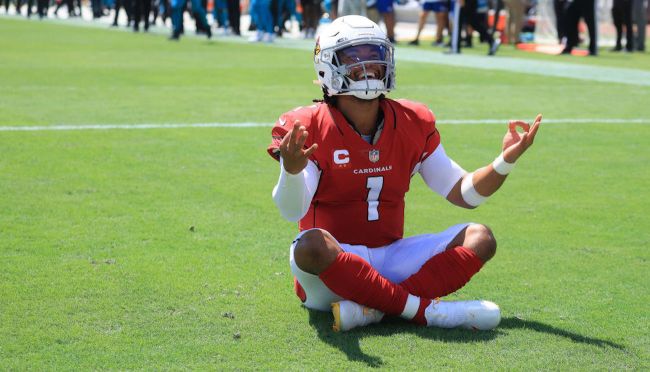 After a long and standoffish offseason — filled with Instagram-scrubbing shenanigans and whatnot — Kyler Murray and the Arizona Cardinals reached an agreement on a new contract on Thursday, with the 26-year-old former University of Oklahoma signal-caller signing a five-year, $230.5 million deal that includes $160 million guaranteed with the team.

Due to the terms of the deal,  Murray will be making $46.1 million per season, which is behind only Aaron Rodgers, who will make $50.2 million next year.

While Murray has lit the league up statistically since being by the Cardinals with the #1 overall pick in the 2019 NFL Draft, it hasn’t necessarily translated to success.

During his rookie year, the Cards went 5-10-1 and then went 8-8 in 2020. Last season, while they made the playoffs for the first time in Murray’s career, they got absolutely smoked by the Los Angeles Rams, with Murray completing just 19 of 34 passes for 137 yards and two interceptions.

The Mahomes contract is going to look even better once the numbers from this release https://t.co/F5oMqmKcuz

As many NFL fans have pointed out, if this is the type of contract that Murray is getting, then how much money are the likes of Lamar Jackson, a former league MVP, and Joe Burrow, who took his team to the Super Bowl, in line to make when it’s their turn to sign new deals?